Former blacksmith’s forge that is steeped in history 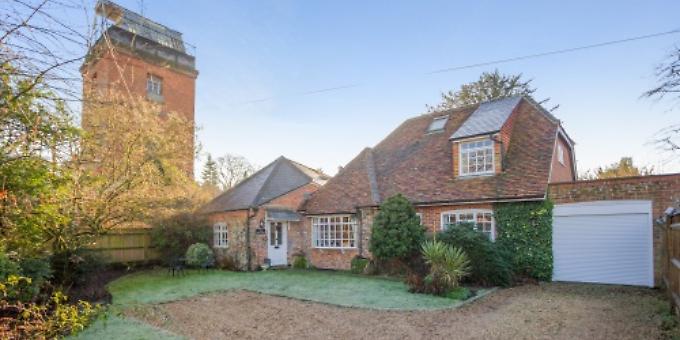 A THREE-BEDROOM house that was once part of the Fawley Court estate is on the market.

The Old Forge originally served as a blacksmith’s forge in the grounds of the mansion house off the Marlow Road in Henley, which was built in the 17th century.

The house certainly looks and feels historically interesting and the pine interior doors add to its character.

Some of the old brick and flint walls are visible on the inside and have been painted white and there are exposed ceiling beams in the downstairs rooms.

The two reception rooms and the kitchen once formed part of the original forge structure. The three bedrooms and two bathrooms are said to have been added in the Fifties.

The vendor said: “The room with the desk has the actual fireplace that was the forge.

“I’m told that the coaches would drive into what’s now the kitchen — there are big hooks on the oak beams and the coaches would be lifted up and their wheels taken off and fixed by the blacksmith.” The front door opens into the room where the old forge fireplace once roared and metal glowed red hot ready to be fashioned into nails, candlesticks and horseshoes.

Much less hot nowadays but still nice and cosy, this room is now an entrance hall/study. It leads through to a comfortable sitting room with a fireplace and French doors that open on to the back garden.

The spacious kitchen/dining room has a high vaulted ceiling, a grey slate floor and granite work surfaces. There is an Aga cooker, plenty of storage space and a utility room.

Beyond the kitchen/dining room there are two ground floor bedrooms with built-in wardrobes, a shower room and the staircase that leads to the first floor.

Upstairs is the master bedroom that has an ensuite bathroom and windows on three sides.

The vendor said: “The rooms are large and light and it’s very quiet here with no traffic going past — it’s very peaceful.” The front garden has a lawn, flower beds, a gravel driveway and a garage.

“The lawned garden is at the front,” she said. “It has got quite a high fence so it’s very private. There is a lovely magnolia tree and a driveway.

“The back garden is what I would call a courtyard garden in that it’s not very deep but it’s very wide. It’s south-west facing and very sunny.

“There’s a wisteria at the back, and a vine, and lots of climbing roses. In the summer the garden is gorgeous — there is a lot of colour.”

There is a paved terrace area in the back garden — perfect for outside dining and relaxing on a summer’s day — along with raised flower beds, plenty of evergreen planting and an ornate pond.

It is said that two Egyptian geese are nesting at the top of the nearby water tower that still belongs to the Fawley Court estate.

The water tower is an interesting old structure. Although it no longer has any real purpose, it adds character and serves as a reminder of the property’s heritage.

Fawley Court is a Grade I listed mansion house set in beautiful woodland grounds, once a deer park, on the west bank of the Thames.

It was designed by architect Sir Christopher Wren, who also designed St Paul’s Cathedral and Hampton Court. The grounds and gardens were created by renowned landscape architect Capability Brown.

The mansion was built in the 1600s for Colonel William Freeman, a merchant and plantation owner, and it stayed in his family for almost 200 years before being sold to railway developer Edward Mackenzie in 1853.

It is said to have been the inspiration for the fictional Toad Hall, Mr Toad’s home in Kenneth Grahame’s children’s book The Wind in the Willows, and is close to the real-life Toad Hall Garden Centre.

Fawley Court was requisitioned to be a centre of military intelligence during the Second World War and, sadly, was left in a state of disrepair.

It was then sold in 1953 to the Marian Fathers, a Polish Catholic congregation, who turned it into a boarding school and a religious and cultural hub for the local Polish community.

Property investor Aida Dellal Hersham bought the estate after it was put up for auction in 2008 and set about restoring the mansion. It remains privately owned.

It is positioned halfway along the regatta course and offers premium hospitality packages in a glass orangery overlooking the river during Henley’s busiest season.

The countryside around Fawley has an extensive network of public footpaths and bridleways. You can walk from there into the centre of Henley, which is about a mile-and-a-half away.