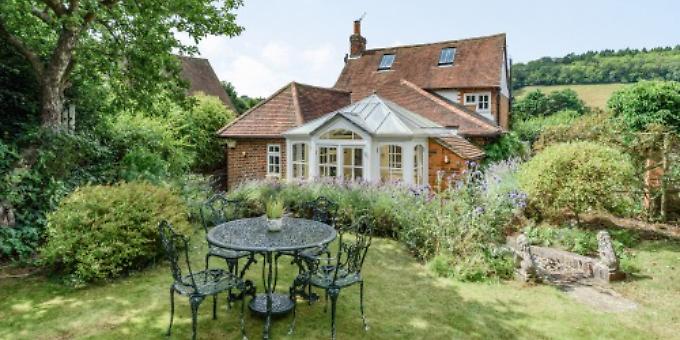 COBBLER’S Cottage in Skirmett is cosy on the inside and spacious on the outside.

The three-bedroom property is owned by Nigel Starmer-Smith, the former England rugby player and commentator, and it has been in the family for the last 18 years.

During that time, the outside space has been turned into a beautiful oasis of green, colour, sunshine and shade.

His son Charlie Starmer-Smith lives in the cottage now with his wife Katie.

“The gardens in the spring and summer are really special, with mature trees and borders full of beautiful shrubs,” he said. “It really comes into its own.

“The lawn’s in lovely condition and there are a few separate seating areas. For someone who is going to make the most of the English spring and summer, it’s an ideal cottage.

“It feels like a garden that has got history and has been lived in — these aren’t new plants or new trees, they’ve sort of grown up with the garden.”

What makes the garden even more special is the splendid views in all directions, over the fields and up towards the woods.

Mr Starmer-Smith said: “From the main bedroom upstairs you’ve got the best views of all.

“The garden itself is raised so you come out of the conservatory and up a few steps to the garden, which is sizeable for the location, and that gives you views both ways. It just gives you that sense of space and I think for people who are moving from a city or town, or even London, it’s that feeling that you can suddenly breathe and be surrounded by real countryside.

“Where the patio is, it’s sheltered, so if there’s any wind you can still be dining out there in nice weather.” The square conservatory that was added by the family brings a lot of light into the house.

It has built-in cupboards for storage and appliances and leads from the kitchen out to the patio area, which is bordered by old brick and flint walls. The kitchen has a traditional country-cottage character, with cream fitted cupboards, yellow wall tiles and wooden work surfaces.

The homely sitting room has exposed oak beams and a wood-burning stove to make it feel really cosy on a cold winter’s day. The stove is set within a charming brick inglenook fireplace, which has probably been there since Cobbler’s Cottage was built in the 1800s (it was previously named Bartram’s Cottage). In the middle of the 20th century alterations were made but the building retains many of its original interesting architectural features.

There are currently three bedrooms and two bathrooms but there is plenty of potential to reconfigure the interior layout.

For example, there is a bedroom with an en suite bathroom on the ground floor which could easily be repurposed as a second living room, or an office for home working.

The master bedroom is on the first floor, where there is also a shower room and a study area on the landing.

On the second floor, there is a third bedroom in what must once have been the loft with walk-in storage space, skylight windows, sloping ceilings and exposed beams.

Mr Starmer-Smith said: “There’s real potential with the top floor for a loft conversion, which others have done along that stretch of houses. If you’re looking for that extra space, it would be an obvious thing to do.

“If you wanted to turn that into a big en suite double bedroom, there would certainly be scope for extending back towards the garden, which others have done.

“If someone wanted to put their mark on it and turn it into a three double-bedroom house with three bathrooms, that’s certainly feasible.”

At the side of the house there is a gated gravel driveway with enough parking space for two cars.

There is a stone seating area at the end of the garden where it backs on to a paddock with horses.

There is also a large shed that is electrically wired, so it could potentially be converted into a garden room or home office. There’s a second shed too. Cobbler’s Cottage is located in the quiet hamlet of Skirmett, just north of Henley and close to the villages of Hambleden, Fingest and Turville.

It’s a quiet, rural location but there is easy access from there to the M40 towards London or Oxford.

On the doorstep there are lots of lovely country walks through the Hambleden Valley and the house is just a few minutes’ walk away from the Frog pub.

Mr Starmer-Smith said: “I grew up in the area. As a family, we’ve moved from Peppard to Gallowstree Common, to Ipsden and then to Skirmett. Of all of them, I think Skirmett is the most beautiful.”