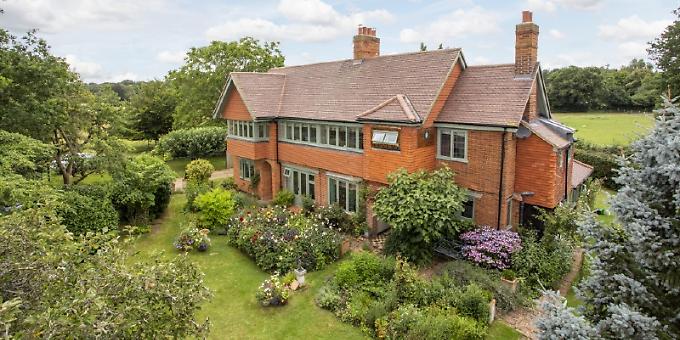 THE Pommery is a five-bedroom house with four acres of land and a history that stretches back more than a century.

Lesley Bashaarat has lived in the house for 46 years. When she and her husband first moved in, they remodelled it so that they and their two children could occupy half of the house, and her parents could live independently in the other half.

Mrs Bashaarat’s elderly parents had the sitting room, the upstairs bathroom, two bedrooms and a kitchen; the rest of the family had a second kitchen, the living room, the dining room and three bedrooms.

The house is no longer separated into two dwellings — it is now one wholesome family home. It was originally built in about 1900 as a small ‘two-up two-down’, and it has slowly grown in size and stature over the years. It used to be called The Drift, but at some point, the name was changed to The Pommery.

Harriet Ford, a Canadian artist practising in the late 19th and early 20th century, once lived in this house. She was highly prolific, creating landscapes, portraits, murals and jewellery. She travelled a lot and exhibited widely, including at the Paris Salon and the Royal Society of British Artists in London.

“The dining room was once part of the artist’s studio, facing north,” said Mrs Bashaarat. “On the mezzanine floor there is a tiled area where she used to wash her brushes — it was definitely a working studio. “This impressive ‘galleried’ room remains an inspiring place to work, rest or play. It is two storeys high with a huge leaded window and a high vaulted ceiling, overlooked by a mezzanine floor with a study on it.

There are two further reception rooms on the ground floor — a sitting room and a living room — and a well-equipped kitchen/breakfast room with Shaker-style units.

It’s a bright and handsome kitchen, with Neff appliances, granite and wooden work surfaces and a dining area that overlooks the garden. There is also a laundry room, a larder and a cloakroom.

The roof and all the windows were replaced about six years ago and much of the house was decorated after that too, in soft pretty colours and elegant soft furnishings.

Many of the property’s original features have been preserved however, including ornate fireplaces and doors, wooden floors and exposed beams and brickwork.

There are also some rather quirky antique tiles from yesteryear dotted about the house, and it is believed that Harriet Ford sourced these from a local tileworks and from abroad.

Mrs Bashaarat said: “There are lots of tiles and there are lots of little nooks and crannies. A lot of the tiles are antique. The artist did travel a lot in Europe, so a lot of them have come from there. The sitting room has most of the older ones.” Four of the five bedrooms and the family bathroom are upstairs on the first floor.

One of them has en-suite facilities and another has a large walk-in dressing room that could potentially be made into another bathroom. The fifth bedroom, also en suite, is on the ground floor.

The Pommery is set in four acres of green-belt land, most of which is made up of two paddocks enclosed by hedgerows and fencing.

“It was a dairy farm when we moved in,” Mrs Bashaarat said. “We asked if we could buy a little strip so that we could get down to the garage that my father and husband built, but they said no, you have to buy four acres.

“We used to have cattle of our own and then we had sheep — now there are horses all around, in all the other fields.” The pretty gardens are south-facing and surrounded by trees. They have areas of lawn, fruit trees, roses and shrubs, a vegetable garden and a greenhouse.

There is also a separate studio/home office building with lighting and power, and a double garage.

The Pommery is in a secluded spot at Bovingdon Green, which is on the Henley side of Marlow. “It’s a terrific family house,” said Mrs Bashaarat, “a nice happy house. And it’s very good for parties.”