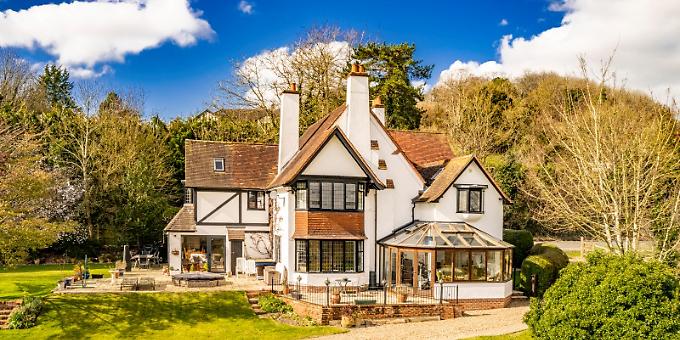 TOWNSEND House, an early Edwardian period home in Streatley, has come on the market this week.

Alan and Mavis Law moved in more than 30 years ago, when their three children were growing up and before their seven grandchildren came along.

Now the couple are planning to downsize.

The main selling points of the property are the same now as when they bought it.

“We bought the house for three reasons,” says Mr Law. “Firstly, we wanted something sizeable because there were five of us.

“Secondly, we wanted something that wasn’t overlooked.

“The third reason, which in many ways was probably the main one, was the view — we look over the Goring Gap, the Thames Valley and right over the hills towards the Chilterns.”

The house is situated in an elevated position atop a plot of about three quarters of an acre, which is why the views over the surrounding farmland and woodland are so spectacular.

The house dates back to about 1900 and was built by Smallbones, a respected local craftsman.

It was designed in the Arts and Crafts architectural style, which was popular in the early 20th century and championed traditional construction methods and skilled workmanship. Mr Law says: “I believe it was a weekend house back then and it was called Townsend Cottage because it’s right next door to what was Townsend Farm.

“The first transaction we have on the records was in 1917, when a lady moved in. It changed hands in the Thirties, then in 1947, and again in 1963. We came in 1989.” Townsend House has a white render façade and a tiled pitched roof. An interesting arched brick entrance porch opens into a reception hall, which leads to a beautiful traditional drawing room with a Lutyens-designed fireplace, oak floors and a bay window.

There is a garden room conservatory on the ground floor, along with a cosy sitting room, bathroom, study and open-plan kitchen/dining room/family room. Upstairs there are five bedrooms, three of which have en suites, and another bathroom. The master bedroom suite is very spacious, with built-in storage, a fireplace and a big bay window.

The Laws have extended the house a few times over the years but they have been careful to preserve the original features that give it so much character, such as the black ceiling beams and original leaded glass windows. Mr Law says: “When we bought it, it was a dentist’s house and he had a little surgery attached to the side.

“We knocked that down and put a conservatory in. We went up as well and put a nice big en suite shower room off the master bedroom.

“We also knocked a few walls down and made the kitchen fairly big. In 2014, we knocked down the outside wall on to the patio and put in an L-shaped kitchen/dining room with a sitting area.”

The kitchen and dining room now form one big comfortable space and there are sofas at one end. This has all created a lovely open-plan area for entertaining and the comings and goings of family life.

The room opens out on to the garden and the lantern window in the roof and the bifold doors let in a lot of daylight.

When they did this extension, the Laws wanted to install red quarry tiles on the floor, like the ones in the kitchen, in keeping with the age and character of the house.

However, it wasn’t easy to source the tiles because the original supplier in Wales had ceased trading.

Mr Law says: “It was a bit of a treasure hunt. I managed to track down someone who had bought a lot of the stock and he charged me a fortune.

“But we’ve now got them in the old kitchen area and the new kitchen/dining area and you can't see the joins anymore.” There’s a quirky set of bells in the study, harking back to the days when family members would summon a servant if they wanted to get dressed or have a cup of tea — just like in Downton Abbey. The bells are still in working order.

Mr Law says: “The study would have been the original scullery. There are buttons throughout the house that you can press and the bells ring.”

The private gardens that wrap around the house are surrounded by mature trees and hedging. There’s a wide lawn, a large stone terrace, a built-in jacuzzi, a double garage and two stables which serve as outside storage space. There is high-speed broadband installed in the house.

Townsend House is a lovely heritage property with lots of traditional character and contemporary features, plenty of privacy and in a great location.

It is situated in the pretty village of Streatley, close to the river, the station, a primary school and all the local restaurants and shops nearby in Goring.