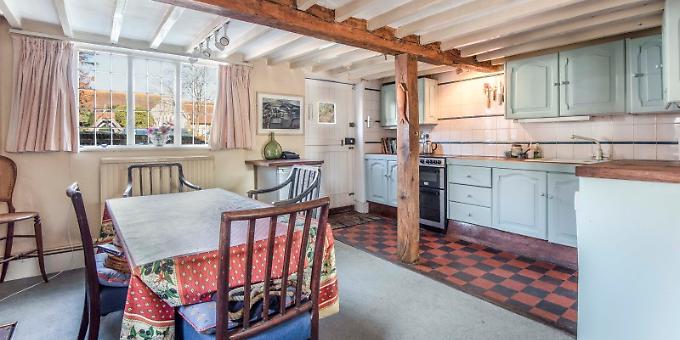 ONE of Hambleden’s most charming brick and flint cottages has come on the market for the first time in 42 years.

Yard Cottage is the former home of Lady Hunt, who moved there from another house in the village in the late Seventies.

One of Lady Hunt’s four sons, Roddy Baird, lives there now and he can recall hearing stories about the place when he was a young boy.

He says: “It had a history of lacemaking and it was a sweet shop as well. I remember the older boys in the village telling me, 45 years ago, that sweets were served from the back of the house.

“I’ve lived in Hambleden for 60 years. I brought up my family here. It’s an incredibly safe place to live and there is a wonderful community here, which is why I’ve stuck around.

“I was on the parish council for so long they didn’t know how long I’d been on it — it was somewhere in the region of 30 years.”

For a long time, Hambleden has been a popular film location for films and TV programmes and Mr Baird remembers some of them being made, including Chitty Chitty Bang Bang. “I was 10 when Dick van Dyke drove the car through the village,” he says. “This cottage featured in 101 Dalmations and loads of other films.

“And Debenhams chose this cottage for one of their Christmas campaigns.”

The stable-style front door opens into the kitchen/dining room, which features a bread-oven fireplace. It has an open-plan design and leads on to the living room area. A sun room with large slanted windows and a full-height flint wall looks out over the back garden — a perfect spot for reading or dozing in the sun on a warm spring day.

There is also an office on the ground floor, which could be used as a snug, and a cloakroom.

The stairs wind up through the centre of the house and there are three bedrooms and a bathroom upstairs. The cottage has been beautifully decorated in keeping with its history and character but there is scope for modernisation.

Outside, there is a private 50ft south-facing back garden which has hedges, flowerbeds, a lawn and a patio as well as some lovely views up to the hills and the surrounding beech woods. There is also a garden at the front.

Yard Cottage is situated in the centre of Hambleden, so it faces the medieval St Mary’s Church and is a short walk away from the shop and village hall.

It was built in 1799 and is Grade II listed in a pair with the house next door. It is not, however, included in the National Trust restrictive covenant, which limits any changes made to most of the land and buildings in the village.

Mr Baird says: “Everybody who has been here says what a warm atmosphere it has, it’s just a charming place.

“And it’s an easy house to live in — it would probably suit somebody wishing to downsize.”