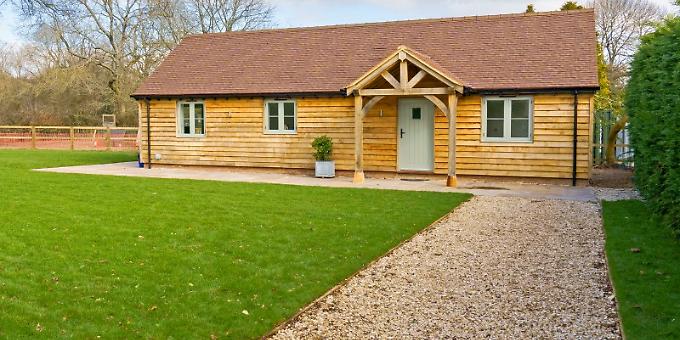 KILN BARN in Russell’s Water is a five-bedroom country house set in mature gardens with two acres of paddock.

It is on the market almost as a two-for-one offer because it comes with a separate brand new three-bedroom cottage in the grounds.

The main house was converted in the Sixties from a 250-year-old barn.

It has a traditional front façade and inside it opens up into a very light, spacious and contemporary family home.

The original oak beams are visible in many of the rooms and additional ones were used in the construction of the newer sections of the house, so it all fits together beautifully.

The front door opens into a reception hall. This leads to a dual-aspect living room with an inglenook fireplace built into the wall and benches on either side.

There is a second sitting room down the hall at the far end of the house.

This would make a great TV or games room, a welcoming space for entertaining, or a room for children or teenagers to relax in with their friends. There is an oak conservatory and dining room on the ground floor, both of which lead into the kitchen.

There is also a bathroom, utility room and cloakroom.

Two of the bedrooms are downstairs and three are upstairs, including the large master bedroom suite with built-in storage cupboards.

The room layout means that the accommodation is very flexible — one or both of the ground floor bedrooms could be used as a home office or snug.

Kiln Barn has just been redecorated. It has recently had a new roof, in keeping with its barn character, and new double-glazed windows have been installed.

The Harris family bought the house just over 20 years ago and they have extended it several times, adding the conservatory and the master bedroom suite.

More recently, they built the stunning oak-clad three-bedroom annexe cottage in the grounds, which was finished at the end of last year.

“It can be used as either a holiday home or a granny annexe,” says Mr Harris.

“It has its own garden area, so it’s well set by itself, and it has a gravel drive that connects the house to the annexe.

“If you wanted to use it as a holiday rental, or if you wanted to have family stay for an extended period, it’s private enough to give them some space.

“It gives a huge amount of flexibility for someone who has an extended family.

“It has got a very beautiful window and a vaulted ceiling at the end of it and that looks out over the fields.

“It has got three bedrooms, an en suite, a modern kitchen — it’s pretty much set for someone to move in tomorrow.”

The mature garden has a wide expanse of lawn and is encircled by trees and hedging.

There is a fabulous south-facing rose garden outside the conservatory and a terraced patio area where you can sit and enjoy the sunshine in peace and quiet.

The entire plot covers an area of nearly four acres and about half the land is paddock — perfect for keeping horses.

There is a gravel driveway up to the house, a double garage and direct access to Russell’s Water common from the gate in the back garden.

In addition to all its attractive features, Kiln Barn comes with a unique claim to fame. In the classic 1968 film Chitty Chitty Bang Bang, this is where Truly Scrumptious, played by Sally Ann Howes, was run off the road into a duck pond by Dick Van Dyke’s character Caractacus Potts.

“There is a scene where the kids run out and almost get run over by the lady and then she goes in the pond. There is a beautiful old wall in those shots, which is our front garden, and the pond is right outside our front gate.

“They came back and filmed a TV special, 50 years of Chitty Chitty Bang Bang, and brought the kids back.

“The guy who owned the car at the time came and drove the car out of our drive.”

As well as being immortalised in the film, Russell’s Water is also known for its friendly community. This pretty village is just north of Henley and close to Stonor, Maidensgrove Common and the Five Horseshoes pub.

In the 1900s there was a brick kiln on the plot, which explains the name of the house.