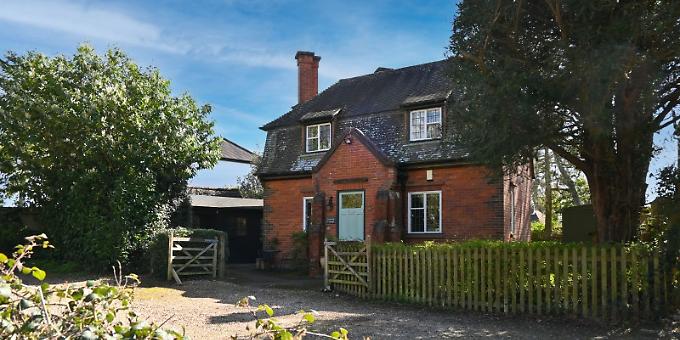 David and Jennifer Paul have been living there since 2007 with their two daughters, Isabella, 21, and Evie, 19.

“Kestrels Cottage was the chauffeur’s cottage for Kestrels and Kestrels Lodge in the middle was the garage, so this was built for the chauffeur originally.”

This double-fronted house was built in 1923 in an Arts and Crafts architectural style as the country house of a doctor working in Reading.

It is said that the famous architect Sir Edwin Lutyens may have designed it because the two of them were friends, although this has never been proved.

“If you look at the style of the doorway and the chimneys, they are very much his signature style,” said Mr Paul.

The front door opens into a hexagonal entrance hall with the original red quarry tiles in place on the floor and windowsills.

Other original features that have been preserved over the years include the wooden floors, oak thresholds between the rooms, the brick fireplaces and some of the lead-paned windows.

Mr Paul said: “It has got bags of character — it’s very cosy in the winter and very cool in the summer because of the thick walls.”

There are two reception rooms at the front of the house, leading from the entrance hall.

The dining room on the left has wooden floorboards, an oak ceiling beam and a panelled feature wall decorated with a William Morris print wallpaper. The cosy carpeted living room on the right has an original arched brick fireplace and looks out over the woods.

Nearly all of the rooms have been redecorated over the last year — in a contemporary style but in keeping with the period property’s heritage.

Mr and Mrs Paul installed a new country kitchen a few years ago and it is light and bright with windows on three sides. It has a black and white chequerboard floor, wooden work surfaces, grey Shaker-style cupboards and a Bosch induction hob.

There is a separate laundry room off the kitchen, with space for a washing machine and dryer, and also a boot room where you can take off muddy shoes or football boots before entering the house. On the first floor are two large double bedrooms at the front of the house and a smaller third bedroom and a bathroom at the back.

Outside there is a separate chalet-style log cabin, which Mr Paul currently uses as a homeoffice. “It’s insulated top and bottom, double-glazed, powered and heated,” he said. “I’m in here all day every day — it’s a great room because you look down the lane on to the woods through the window.

“The nice thing about having it separate from the house is that I still go to work, and I still come home from work.”

The couple recently started the process of applying for permission for a two-storey extension. After making enquiries with the planning department and submitting pre-application drawings, Mr Paul is confident that permission would be granted should the new owner wish to extend the house.

He said: “We put in initial drawings for planning in principle and there are a couple of different options.

“One is to make it into a four-bedroom house, which goes into the garden about another four metres, and the other would make it a large three double-bedroom, which only goes two metres past the current build line.”

There is a south/south east-facing back garden with a lawn, storage shed and workshop with power and fitted benches.

At the front there is a wooden picket fence bordering the garden and lots of parking space on the driveway.

One of the most appealing things about Kestrels Cottage is its tucked-away semi-rural location. Mr Paul said: “The woodland opposite is common land belonging to the Nettlebed estate, so it can never be built on. It’s really good for walks and cycle trails.

“We’re at the end of the cul-de-sac and the house sits in its own plot, so you can walk all the way around it. It’s the one that’s tucked away the most — it’s peaceful, it’s quiet, and nobody ever comes down here.

“We get lots of wildlife visiting. We get owls, bats and foxes and roe deer and muntjacs on the driveway. It’s nice for dog owners and cat owners too — we’ve got three cats and they love it because they go straight into the woods and suit themselves.”

Mr and Mrs Paul have enjoyed living in Kestrels Cottage but with one daughter already at university and the other soon to follow, they have decided it is time to move on.

Mr Paul said: “Jennifer's parents live in Shropshire and we want to be near them.

“We’re looking for somewhere with an annexe so they can move in. Otherwise,
we wouldn’t even consider moving.

“This house has nothing but joy. It has a wonderful aura to it, it’s a happy house. Although it’s quite small, it feels special and when you walk in it gives the appearance of being grander than it is.”