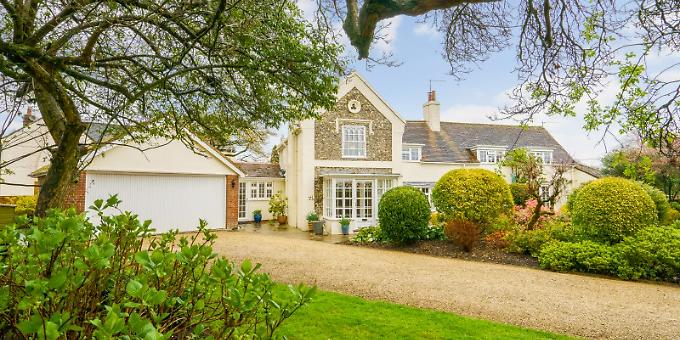 AN 18th century home at Park Corner, near Nettlebed, is on the market with Savills.

Chris and Dayle Williams have lived at Brackenridge for just over five years and now plan to move to Wensleydale in the Yorkshire Dales.

“We got married about seven years ago,” says Mr Williams. “My wife lived in Watlington for 40-odd years before that and she always passed the house and loved the outside of it.

“A month after we got married, the house came on the market so we went in to have a look inside and both fell in love with it. Within two months, it was ours.”

Since moving into the three-bedroom house, the couple have renovated the parts that needed attention and replaced most of the windows and doors.

They have also redecorated throughout, largely in a Georgian style.

The front door opens into a large entrance hall where a spiral staircase leads up to the first floor.

The dining room is situated at the heart of the house and is perhaps the most traditional room with original ceiling beams and wooden floors.

There is a Clearview wood-burning stove set within the brick inglenook fireplace, which once housed two bread ovens.

The carpeted living room is beautifully light and bright with a feature fireplace and four sets of French doors leading out to the gardens. During lockdown Mr and Mrs Williams built a new kitchen in place of a walkway that connected the house to the garage and converted the old one into an adjoining breakfast room.

The kitchen has bespoke Neptune wall and base units, a dual-controlled electric Aga and Carrara marble work surfaces. There is scope to add a utility area off the kitchen in the double garage because the plumbing has been installed.

A staircase from the entrance hall leads down to a warm and cosy basement room, which is currently being used as a home office and storage room. Once upon a time it had quite a different purpose, though. Mr Williams says: “It was the local off-licence during the war years, from about 1920 to about 1945 or 1950.

“The cellar is where they used to clean the barrels of beer. People used to come from around the area and top up their beer but they had to drink it off the premises. The original house was built around the mid-1700s. In the Fifties, a builder who wanted to live here added to the house quite substantially, so everything is done to a high standard of workmanship.On the inside there’s some clunch — a sort of chalky limestone mix — which came from Ewelme quarry. A lot of the old houses around this area have got clunch, which was an original building material.”

There is a nice use of space on the quiet mezzanine area at the top of the spiral staircase, which is currently used as a snug.

It looks out over the fields and is the perfect place to curl up and read, away from all the comings and goings downstairs.

There are three bedrooms and two bathrooms on the first floor and there is the potential to convert the master bedroom into an en suite.

Brackenridge has a distinctive decorative front façade with an entrance porch and flint and render on the walls and a private walled garden.

The mature back garden is stocked with mature shrubs, trees and seasonal planting. It has a well-kept lawn and wide terrace area and looks out over open fields.

“My wife is the gardener,” says Mr Williams. “She has got all manner of plants, acers and hostas. She has worked very hard over the years to develop the garden.

“We’ve got a Crown Pavilion summer house, which has got heating and lighting. It’s for outside dining and you can use it February to November.

“It seats eight people comfortably, so we have dinner parties out there in the summer.”

Park Corner is just past Nettlebed on the way to Watlington.

Mr Williams says: “It is a very nice community, with ages ranging from thirties up to eighties.

“It is getting younger by the year because younger families are wanting to come into this area.

“It is a working hamlet – there are only 25 houses and a couple of working farms and we are surrounded by bluebell woods.

“It is a rural, very friendly community and the only reason we are going is because we want to go up to Wensleydale.”