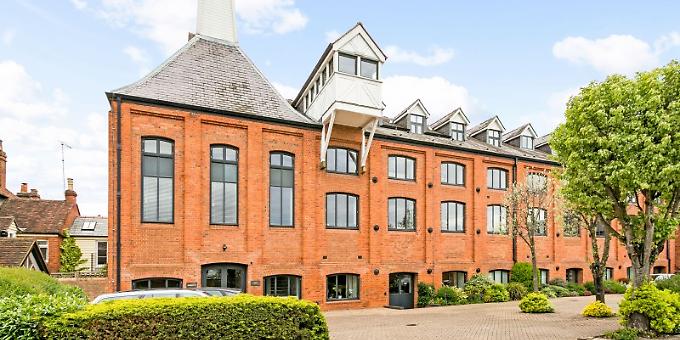 A MODERN, two-bedroom flat owned by a former rower is on the market with Savills.

The Malthouse is a Grade II listed building on the north side of New Street in the centre of Henley.

It was built in the late 19th century and has a classic Victorian red brick façade with a grey slate roof and arched recessed windows.

Its two tall towers are one of Henley’s most iconic landmarks; they can be seen from the river and all over town.

This sturdy, imposing building was originally owned by the Brakspear brewery on the opposite side of the road and was used for malting — the process of soaking, germinating and kiln-drying grain to be made into beer.

Brakspear had seen off most of its rivals and became the town’s biggest and most successful brewery and pub owner by the time the Malthouse was built.

Malt production there stopped in 1972 after which the building was used as an office building for a few decades.

In 2007 it was converted into three floors of flats and a penthouse apartment.

Number nine is on the second floor, so it has a view over Henley’s rooftops and overlooks the trees and bushes growing around the forecourt below. The flat was refurbished in 2014. It has an open-plan design, three windows at the front and skylight windows above the rooms at the back.

Some of the original wooden ceiling beams were left exposed during the renovations. There is a comfortable sitting room area, a dining area and a modern kitchen with Miele appliances and granite work surfaces.

There are two well-proportioned bedrooms and a bathroom. The master bedroom has an en suite shower room with contemporary fittings and tilework and a walk-in wardrobe.

Mary-Ann Millar, who bought the flat off-plan when new, says: “It has been a really joyful place to live and the open-plan area is just fabulous for entertaining. I used to have lots of friends around. We’d be there on many happy occasions watching the Six Nations rugby after having lunch and everyone was sitting on the floor and on the sofa — it’s a lovely big area. It’s also so convenient. What was really important for me was that I was part of the town. I’d go to Hotel du Vin or I might go to Café Rouge or the Angel on the Bridge, or I might go for a long walk along the river and end up at the Flowerpot. It has just been fabulous.”

The location is perfect for someone who is interested in rowing because it is so close to the river, the regatta site and all of Henley’s rowing clubs.

Ms Millar said: “I used to row very seriously and I could walk to Upper Thames Rowing Club where I was training.

“At age 36, I competed for Scotland in the Commonwealth team and in the home international team too.

“Rowing was a big part of my life. It took me 18 years to get to a reasonable level but once I was there, I won a couple of medals at Commonwealth and a couple at home internationals.”

Ms Millar now plans to settle permanently on the other side of the world, having married an Australian.

She said: “We emigrated in May 2018 with the plan that we would be coming back for a wonderful trip in 2020 to see our family.

“Everywhere we had booked for our holiday was a covid hot spot, so that had to be called off. We kind of got stuck in Australia and I couldn’t get back to Henley until now.

“I will go back to Australia – my husband has quite a lot of family on the east coast and I think we’ll go just a bit north of Coffs Harbour.”

The Malthouse is set back from New Street in a quiet location behind electric iron gates and the flats are accessed via a secure communal entrance hall.

Ms Millar said: “You’ve got a gated car park with two spaces. You’ve got a keypad door entry and a lift, which again is brilliant from a convenience point of view.

“It’s really quiet because it’s off the road. You’ve got a flat on either side of you and up and down from you, so it’s well insulated and the building itself is extremely solid.

“Having been a malthouse, the walls are very thick and the construction is very solid – it had to be in order to sustain the weight of all that product.”

The Malthouse is an important part of Henley’s heritage and a triumph for the art of making a historic building a pleasure to live in while preserving its character.