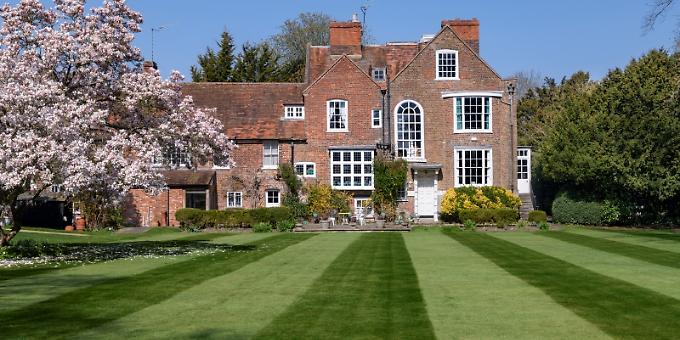 ONE of Henley’s finest country homes went on the market today (Friday).

Bird Place is a Grade II listed property built in the 18th century. It is located just south of Henley Bridge, next to the regatta headquarters.

From the end of the garden you can see down Friday Street across the river, and the town centre is a just a two-minute walk away.

And yet you could live in Henley your whole life and not know Bird Place is there — because it is discreetly tucked away behind towering yew trees and poplars, hornbeams and horse chestnuts.

The 10-bedroom house is set in grounds of more than two acres, with 400ft of private riverfront mooring for boats, along with a picturesque creek suitable for punts and dinghies.

A small private footbridge has been built over the reeds and wildlife in the creek below.

The garden is well-stocked with mature planting, bushy laurels and flowering rhododendron, and it has an immaculate striped lawn stretching from the house to the river.

There is also a glass and brick conservatory down by the water, and a heated swimming pool and sun terrace.

It has a unique mix of architectural styles. The front façade has classic Georgian symmetry, balance and proportion, with its tall sash windows and columns at the front door.

Some of the rooms date back to the Victorian era, while others were added more recently. In total there is 7,400sq ft of living space spread over three floors. There is an abundance of gorgeous period features dotted throughout the house, including solid wooden floors, ornate cornices and swirly patterns on the high ceilings.

There are some beautiful old working fireplaces with space to store dry wood ready to throw on the fire on a chilly winter’s evening. The front door opens into an elegant entrance hallway with all the original white wall panelling and fine fluted columns.

The principal reception rooms are in this oldest section of the house. The grand drawing room has a rounded bow window and views over the gardens, and the formal dining room features an old-fashioned hatch to what would once have been the staff quarters.

It is said that a Dr Thomas Staines Read once owned Bird Place — he saw and treated his patients on the ground floor, before moving his medical practice to the NHS Hart Surgery on York Road in 1948.

The kitchen/breakfast room and a cosy family room are down some stairs on the lower ground floor, and there is a cellar below.

From the entrance hallway, a grand staircase curls up past a tall arched window to the first floor and seven of the 10 bedrooms, two of which are en suite.

Somewhat mysteriously, the stairs to the other three bedrooms in the attic are hidden behind a mirror, and another set of stairs leads up from the attic to the roof.

From that position at the top of the house, you get a spectacular birds-eye view of Henley’s rooftops, the bridge, down the river and over the blanket of trees that surrounds the town.

More than 50 years ago in 1968, Peter Sutherland and his wife bought Bird Place, and it has been in the family ever since. Their son Justin Sutherland lives there now, with his wife and children.

There is a long history of rowing in the Sutherland family, so the house has become something of a rest and relaxation stop for hundreds of members of the rowing community over the years.

Mr Sutherland said: “My father rowed at Shrewsbury School and later at Cambridge. He was involved in the Great Britain international team and setting up various different rowing clubs, one of which was Upper Thames.

“We've had a lot of rowing people here — Olympic champions, world champions, the great and the good — lots of school crews over the years, and people from abroad coming to compete at Henley Regatta.

“With the rowing club and the house conveniently close to the regatta, rowing people have tended to gravitate towards us. They come and rest in the garden or in the house before they race.”

Prime Ministers past and present, including Boris Johnson, have made themselves at home too.

Mr Sutherland added: “Boris has been a friend of the family for many years. We’ve got some good letters from him that mention Bird Place, about being in the garden and having fun.

“Our family tried to support Theresa May when she was starting out as an MP — she’s still the local MP for this side of the river.

“She used to pop in and see my mum for a cup of tea occasionally, and she kindly came and presented some prizes for an event I put on while she was Prime Minister a few years ago.”

Rowing bigwigs and political movers and shakers aside, the house has also hosted visitors from the music world — including Sir Tom Jones and Simon le Bon — and a number of fetes, art exhibitions and other events.

The property, with price on application, will be on the market with Bovingdons estate agency from today. For more information or to arrange a viewing, please call (01491) 313313.