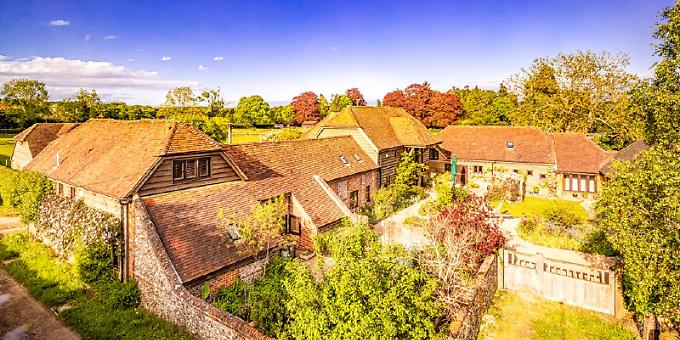 CHARITY Farm Barns, a six-bedroom country residence with fruit and vegetable gardens, paddocks and a pool, is on the market.

The house is adjacent to the Goring Heath almshouses, a small cluster of homes in a Grade I listed building down a tree-lined avenue in the grounds of St Bartholomew’s Chapel.

The charity was founded by Henry Alnutt in 1724 to provide housing to the elderly rural poor who had lost their homes because they could no longer work the land.

In those days, the charity owned a farm that supplied food and milk to its residents.

At some point the farmland was sold and subsequently divided into a number of smaller plots that were also sold over the years.

David and Jacqueline Fitzjohn bought about five acres of the original land and its barns in 1994.

They then got planning permission to convert it all into a residential property, an ambitious project that required the careful preservation of the Grade II listed buildings on site, and built Charity Farm Barns.

Mr Fitzjohn says: “When we got it, it was a derelict set of barns with no insulation and no services.

“We redeveloped it as a house and built some other outbuildings. We had to lower the floor level to get the second floor in.

“We had to fix the structure and then completely re-clad it, do the roof, walls, insulation, interior and underfloor heating. It was almost a complete rebuild but we just had to keep the timber frame, much of which is now visible.

“It took us about four years to do it, on and off. We were living in the States as a family, so this was done while we were living away.”

The farm was built in the 18th century and extended at various times over the years, so the original buildings are a bit of a cornucopia of rural architectural styles.

The old wooden barns are linked by Victorian brick and flint rooms, which once would have been used as pigsties, a dairy, storage rooms and so on. The living accommodation is now arranged on three sides of a rectangle, with a courtyard garden in the middle.

The biggest section of the house was originally a threshing barn, which is where the farm workers separated the grain from the harvested crops, and its high vaulted ceiling now towers above the open-plan family/dining room and TV room.

At one end of the ground floor there is a cosy drawing room and an office, with two guest bedrooms and a bathroom above. There are two more bedrooms downstairs along the corridor from the kitchen, with its walk-in larder and boot room.

On the opposite side of the courtyard is an indoor vaulted swimming pool and jacuzzi room — once an open cart shed — with French doors that open out on to the garden, along with a potting shed and a studio.

Upstairs, a long galleried landing overlooks the family/dining room, and connects the master bedroom suite to the library and another en suite bedroom.

In addition to the main house, there is a new separate three-storey building, which has a self-contained two-bedroom flat above a triple garage.

Outside, the lovely formal gardens with lawns and terraces lead to an area of cultivated and productive gardens.

There is a large greenhouse along with polytunnels, a watering system and outside storage. Thanks to Charity Farm Barns’ agricultural heritage, Mr and Mrs Fitzjohn have been able to rear animals and grow fruit and vegetables while they have been living there.

Over the years they have raised pigs, lambs and chickens. They have grown apples, pears and cherries and produced some delicious home-made grape juice.

“We rigged it out so that we could do the butchery, the cider-making, the charcuterie and all the vegetable preparation and processing.” There is also a second garage, a studio annexe and a tennis court within the grounds. More than four acres of the land is divided into eight paddocks with fencing and there is a large barn that could accommodate up to 10 horses.

Charity Farm Barns could potentially be turned into a commercial smallholding because it has everything you might need for local food production. However, it would be equally appealing to someone who wants to live a quiet comfortable life, entertain friends and family occasionally, enjoy the views, walk through the surrounding woodlands and maybe swim or play tennis every now and again.

Goring Heath is a quiet rural hamlet between Sonning Common and Goring. It is home to just a sprinkling of houses and cottages, including what was once the original farmhouse. The property has a total internal area of 9,041 sq ft, of which approximately
6,609sq ft is the main living accommodation and the rest is the additional rooms and outbuildings.