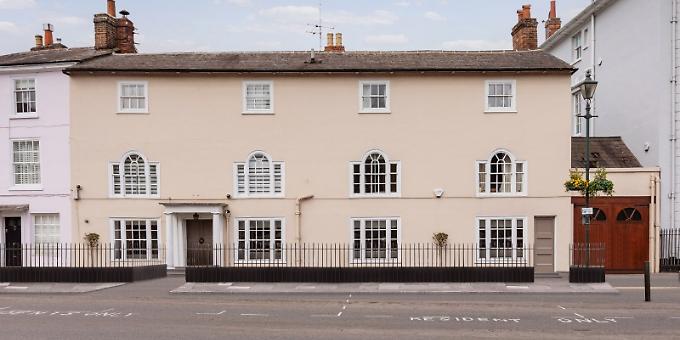 OLD Bell House, an elegantly decorated five-bedroom home with a fabulous garden, is a rare find in Henley town centre.

As a Grade II listed property, believed to date back to the 15th century but with a Georgian façade, it is steeped in local history and stories of times gone by.

It is said, for example, that Prince Rupert of the Rhine, a royalist cavalry commander, held meetings in this house during the English civil war in the 1600s.

The accommodation is arranged over three floors and there is a self-contained flat on the first floor with its own entrance.

The front door of the house opens into a large hallway that leads into the sitting room at the front and then a study which could be used as a bedroom.

At the back of the house there is a charming family room with a wide internal window, so whoever is in the kitchen can keep an eye on what is going on in there.

The family room and kitchen both have sets of French doors that open on to the south-facing garden, which is surprisingly large and private for the centre of Henley.

The garden is well-stocked with mature trees and shrubs, flowerbeds, hedging and a lawn and the sun-soaked patio at the top is the perfect place to relax and eat al fresco. Upstairs there is a beautiful master bedroom suite that runs from the front to the back of the house. It is a fine example of high-quality modern décor, tastefully done and entirely in keeping with the age and character of the house. The bedroom section has a high vaulted ceiling, complete with some of the original oak beams, and a long wooden bench that runs across the two windows overlooking the back garden.

The bathroom/dressing room in the master suite has twin sinks, a free-standing bathtub and lots of storage space for clothes.

There is another en suite bedroom on this floor and three more bedrooms and a bathroom on the second floor.

Giles Robinson, of estate agents Robinson Sherston, who are marketing the property, said: “This is probably one of the nicest houses in Henley, it is absolutely beautiful.

“It is very rare to find such a large walled garden – it has been beautifully laid out with a watering system.

“The house itself has had no expense spared. It has been done up to the highest standard. It is a real quality property.

“It is said that the cellar leads to a network of underground tunnels, now filled in, that led to the Olde Bell pub and the river.”

There is an attractive triangular office/studio in the garden, which would suit someone who works from home, and there is a garage at the front.

The homeowner is eligible for a residents’ parking permit.

Old Bell House is at Northfield End, which is at the far end of Bell Street and the bottom of King’s Road.