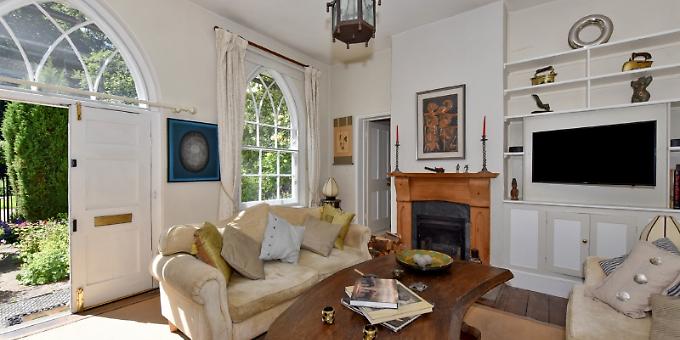 A PICTURESQUE Grade II listed cottage with a leafy country garden is available to rent at Christmas Common.

End Lodge, which is all on one level, has a long history and lots of character with a distinctive pink façade.

The property has been in Simon Clinton’s family for about 30 years.

“It’s a beautiful house,” he says. “The number of people who wander up and take photos of it and say, ‘Can I buy it, can I rent it?’ We’ve had Americans, Japanese, Chinese tourists asking if it’s available to buy.

“It’s bit of a local iconic building — everyone references it when driving through Christmas Common. They say, ‘Look for the pink cottage and I’ll give you directions from that point’.

“It is about 300 years old, give or take, and no one is 100 per cent clear about its original history.

“There are very strong views that, particularly in the 18th century, it was being used unofficially as a Catholic chapel but masquerading as a gate lodge to the huge estate down the road before the Catholics were free to worship.”

Secret religious gatherings like these would have taken place in the middle section of the house, which is the oldest part and slightly taller than the rest.

This space is now a living room with sofas and a dining table and chairs at one end.

It has a pair of grand arched sash windows, a double front door with an over-light, a wooden floor and traditional fireplace and feels very spacious.

Mr Clinton says: “The main lounge has got really high ceilings, so it’s quite spectacular. For a small cottage, it is surprisingly spacious.”

There are two bedrooms, one on either side of the living room, with gothic architectural features on the exterior and windows that overlook the front garden. We imagine those two side bits with a gothic arch would have been added to the building maybe 100 to 150 years ago,” says Mr Clinton.

The cottage is in good decorative order throughout with pale walls, white woodwork and fitted cupboards and bookshelves.

Mr Clinton says: “Since we’ve had it, it has not been extended but it has been completely renovated in terms of improving it, wiring and painting.

“But the previous owners, who were a young couple, got permission to extend the kitchen at the back in the early Nineties.

“They were one of the three people who bought the house as it has only ever been on the open market, we think, about three times in its entire life.”

The kitchen and bathroom are located at the back of the house behind the living room. The kitchen has a butler sink, base and wall units and integrated appliances.

Outside, the sheltered back garden is a beautiful oasis full of well-established trees, bushes and shrubs. There is a lawn, a patio area for a table and chairs, a garden office and a shed.

The front garden is also well-stocked with plants and trees and is set behind dense hedging and a stylish wrought iron gate. There is another lawn at the front and space for off-street parking.

Mr Clinton says: “There is an amazing tree that has white flowers and in the last few weeks, all those white flowers have turned bright pink. It’s quite bizarre. I’ve been told it’s quite a rare tree, it’s Korean.”

End Lodge is in the heart of Christmas Common, close to the Fox and Hounds pub and surrounded by unspoilt countryside.

It is within easy reach of Watlington and the M40 motorway and a 20-minute drive from Henley.

Because of its peaceful, idyllic location and its abundance of country cottage charm, the property has proved to be the ideal place for creative endeavours and quiet contemplation.

“Over the years, we’ve had some amazing tenants here,” says Mr Clinton. “We’ve had authors who live in London and wanted to live here for inspiration – there was one here for about a year and a half, just writing her latest books.

“We had a film director who was here for three years because he wanted the peace and quiet and quite a well-known architect.”

End Lodge is available to rent on either a furnished or unfurnished basis from the end of July at £577 per week. For more information, call Savills on (01491) 843000.