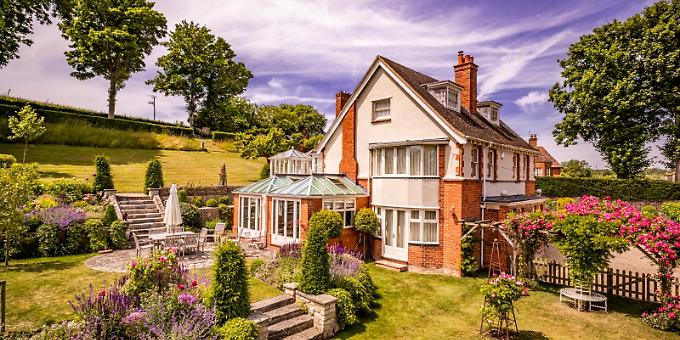 ASHDOWN HOUSE — a five-bedroom property that is on the market with Warminghams — is an excellent example of how to make a home on a hill.

It is situated in the pretty riverside village of Streatley, with views over the Thames and the Goring Gap all the way to Ipsden on the other side of the valley.

The garden is organised into sections that step up the hillside, and there is a wonderful sense of height and light and space all around.

The top of the property borders the National Trust land of Lough Down, at the edge of the Berkshire Downs, where you can ramble through miles and miles of fields, woodland and gentle hills sprinkled with summer wildflowers.

Jeremy and Emma Oakley have lived in Ashdown House since 2015, and it has been a wonderful place for them to host and entertain their children and grandchildren over the years.

It was built in 1901, originally as two small cottages that were later joined together, and it was extended about 30 years ago.

The couple completely refurbished the place not long after they moved in, putting in a new kitchen, bathrooms and flooring, upgrading the electrics and central heating system, and redecorating throughout.

They were careful to preserve some of the charming old period features. “It’s very much a Victorian house with high ceilings and thick walls,” said Mr Oakley. “There is a black and white chequered tile floor in the top conservatory that is original.

“And in the main entrance hall is an original Victorian window, which has many small square panes, and in the middle of it is a glazed cross. It was originally, I think, part of the estate of a local religious order, as were a lot of the houses around here.”

The porch front door is also at least 100 years old — it was refurbished by a glazing specialist when the Oakleys moved in — and they gave the original sash windows the same care and attention.

On the ground floor there is a large traditional sitting room with a curved bay window, French doors and a fireplace, and there is also a separate family room.

The stylish kitchen leads through to a dining room/conservatory with two sets of doors that open on to the garden. There are three bedrooms and three bathrooms on the first floor, and two more bedrooms upstairs again on the second floor.

One of the most unusual and eye-catching features of this house is the spiral staircase that leads up to the top conservatory, with its black and white tiled floor.

This room is technically on the first floor but, because the house was built on a hill, you can stroll out to the beautifully landscaped garden from here.

Since moving in, Mr and Mrs Oakley have filled the garden with their favourite plants and trees, although the basic structure of levels rising up the hillside was already in place when they moved in.

Mrs Oakley said: “When we came here, as much as the garden was already laid out, it was full of ground elder, so we completely took everything out.

“Where you walk up by the top conservatory, you look down on to the borders of the garden.

“If you were in a very grand Edwardian house, that’s how it would have been laid out – you would have had gravel terraces, and then you walk along there looking down at what you've built below. So it was a very easy garden to design.”

The garden has two level lawns and a third gently sloping one, two sets of stone steps and a terrace, lots of well-stocked borders, mature hedging and sycamore trees. There is also a flat area at the very top, which was once a tennis court, where you can play cricket or football without worrying about the ball rolling down the slope.

The entire property is fenced in to make it rabbit-proof. There is a detached garage by the gravel driveway and parking area, four outdoor taps for easy watering, outside lighting and a summer house.

Mr and Mrs Oakley are now retired and their children and grandchildren are all grown up, so they hope to move to a smaller house on a flatter plot in the middle of the village.

Mr Oakley said: “We both play golf and we’re a five-minute walk from Goring and Streatley Golf Club – so it will be a wrench to move away from that – but the house is tailor-made for a family. When we had the grandchildren here they had such a wild time, it’s a great garden for playing in.” Ashdown House is on the market with Warmingham at a guide price of £2,350,000. For more information or to arrange a viewing, call (01491) 874144.