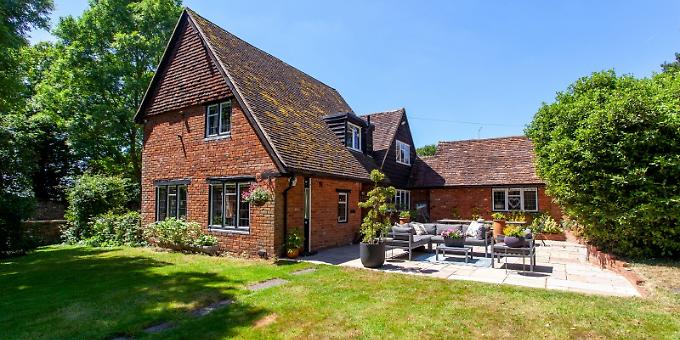 A THREE-BEDROOM house hidden away in a peaceful oasis of green is on the market with Ballards.

Pond Farm sits quietly at the end of Blackmore Lane on the edge of Sonning Common, and is enclosed by mature gardens on three sides.

The house is a Grade II listed building, whose two oldest rooms — the sitting room and the bedroom above it — are believed to have once been part of a late 17th century farmhouse.

James Quartermaine moved in seven years ago, having lived elsewhere in Henley for 20 years, and the house and garden were quite run-down at the time.

“A lady had lived here for 40 years previously on her own,” he said. “I think she was an interior designer and bred dalmatians and, I think, from the little stories I’ve heard, she was quite a character.”

Mr Quartermaine launched into an ambitious project of fixing the place up and completely renovating it, while preserving the best of its historic character and features.

“It’s been extensively refurbished over the years. It did need a lot of care — it’s had a whole new roof, it’s had a new kitchen, new bathroom, boiler, flooring and new patios,” he said.

The house has distinctive dark metal-framed crittall windows with small panes of glass, and there is some unusual decorative brick and tilework on the exterior walls.

Inside, there are exposed timber beams and brick walls, and the whole house has been tastefully decorated in calm contemporary colours.

A welcoming reception hall in the middle of the ground floor leads into a large open-plan kitchen, with a breakfast bar and a family room with double wooden doors at one end.

The sitting room, which is more than 200 years old, has its original wooden structure on display and an old inglenook fireplace that now houses a wood-burning stove. There is also a dining room with a built-in bar downstairs. This room is connected to a separate utility/boot room which has its own external door, space for a second fridge-freezer, and plenty of storage cupboards.

Upstairs on the first floor there are three good-sized bedrooms and a bathroom, and the master bedroom has an en suite shower room. The gardens and grounds at Pond Farm were very overgrown when Mr Quartermaine moved in, so cutting it all back, replanting and nurturing it back to life was certainly a challenge. But the work has slowly revealed a lovely cottage garden with tall trees and woodland, distinct areas and old flint walls from days gone by.

It is now full of well-established shrubs, bushes and borders, and views over the countryside beyond. The garden is completely enclosed, so it would be a safe place for dogs and children to run around.

There is a large courtyard patio with a table and chairs, sofas and a coffee table outside the front door, which is actually in the back garden overlooking the fields. It gets a lot of natural sunlight because it faces south.

For a quiet sit down in a sheltered spot elsewhere in the garden, there is a second stone patio just outside the double doors of the kitchen/family room.

There is plenty of parking space on the gravel driveway, and a double garage with the potential to be converted into living accommodation.

The garages could possibly be turned into a studio or home office, a summer house or games room. Planning permission was granted in the past but it has since lapsed, so a new application would need to be submitted. Sonning Common is a popular village with a full range of amenities, including doctors’ and dentists’ surgeries, shops and a library, a primary and secondary school, and plenty of pubs and restaurants nearby.

Mr Quartermaine and his partner James Miller now plan to move out of the house, but they love the area so much that they do not intend to go far.

“It's a single-track lane, there are just six houses up here and it's a little bit of an oasis,” he said. “We all get on — we all had a jubilee party together and we socialise at Christmas — so it’s quite a little community.

“You feel like you could be in the middle of nowhere, but you’ve got the luxury of being so near to Henley, so near to Reading, and to be able to get up to London if you want to.

“You’ve got countryside all around you, it’s that feeling of being ensconced in nature. During covid, it felt like a special place to be — having space and nature around you is just so good for the soul.”