'How many secret gardens? I'm sorry, I haven't a Cluedo' 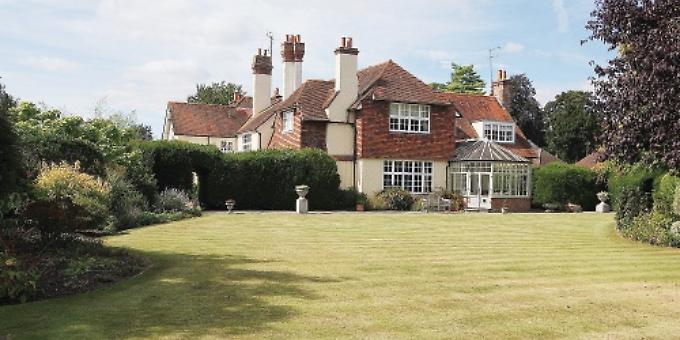 THOSE who know Whitchurch know that the River Thames divides it from the neighbouring town of Pangbourne.

With its local pubs, church, water mill, and ancient toll bridge (visitors still have to part with 60p to cross, although locals can get a special card) Whitchurch has all the atmosphere of an olde worlde rural village.

Yet living here means being able to take advantage of its bustling larger cousin on the opposite bank. (Along with Pangbourne’s shops and amenities, you can catch the train to London in about 50 minutes.)

Another signature of a traditional English village has to be the gentrified estate. In this instance it happens to be this issue’s feature property, Swanston House, which is right in the village centre and manages to marry large proportions with period style.

“This is why I fell for it in the first place,” says Mr Bradley, who has lived at the property for the past six years.

Swanston began life in the early 1600s as a classic Tudor cottage, but became part of a brand new Georgian/early Victorian country house when a certain Sir John Forbes got his hands on it in the mid-1800s.

A friend of Florence Nightingale and chief physician to Queen Victoria herself, Forbes was looking to create a “royal palace” of his own — and that’s just what he did.

At this time the estate comprised several acres of land, so along with the main house he was able to create separate staff buildings — thus, we get neighbouring properties Stable Cottage and Swanston Cottages.

When incorporated into the new manor, the existing Tudor cottage was given a facelift and used as staff accommodation (now called Swanston East).

The main house was built from quality materials and decorated with fine mahogany and stonework.

Aligned with the dining room is a formal garden with a brick-laid path to an ancient sundial and pretty box hedging and topiary.

The gorgeous south-facing gardens are a feature of the property. They offer all kinds of secrets to uncover including a play area, a grapevine/
greenhouse/potting area, and several secret gardens separated by yew tree arches and hedging — as well as sweeping lawns running alongside well stocked herbaceous borders and shrubberies.

Landscaped during the Georgian/
Victorian era, the gardens contain plenty of mature specimens too.

“The gardens were planted according to the seasons,” says Mr Bradley. “In spring the borders get these lovely crocuses, followed by the daffodils and then wild geraniums, and finally the most wonderful peony roses in pink, white and deep red. Some of these plants are 150 years old — the flower heads are as large as two of my fists together!”

Mr Bradley says he will very much miss the gardens when he sells the house, although he won’t be going too far from it as he is staying in the area. “Whitchurch is a wonderful to place to live,” he adds.

While Forbes was building his house, he also had an indoor tennis court built in the grounds. However, this was later converted into a house — called Racquets in tribute to its former use.

By the 1900s new owner Frank Loughborough Pearson had spotted the house’s potential, calling it “the best site in the village” — right on the high street, yet set back from the road so as to feel private.

Pearson had just finished a “rejuvenation” of Hever Castle for the legendary Astor family and was looking for a project of his own — and you can tell by the detailing that he poured his heart and soul into Swanston.

Between 1908 and 1910 he entirely remodelled the main house in the Arts & Crafts style, maximising the southerly aspect and distant views.

“It is rare to find a house of such excellent proportions within the heart of one of the most notable and famous Thames-side villages,” says Katherine Singleton of Dudley Singleton & Daughter, which is marketing the property. “The house was essentially designed and constructed for large family use within a period where large-scale entertaining was an everyday occurrence.”

Once inside the property, it becomes obvious what she means by this. The hallway is immense and the downstairs cloakroom/WC is larger than some bathrooms.

And then there is the huge, polished-wood floored 43ft drawing room. “Some of the locals call it the ballroom,” says Mr Bradley, citing how previous owners used the room for holding dances.

With amazing character features such as oak panelling and marquetry fireplace surrounds, this room is most definitely the ‘wow factor’ of the house. Even the ceiling is a work of art, with its plasterwork mouldings of cut leaves and vines.

“When the kitchen was being remodelled a few years ago by Reading-based kitchen remodeller Griggs & Mackay, the carpenters said they’d never see anything like this quality marquetry,” says Mr Bradley. “It’s so unusual to have thin strips of mahogany inset into oak like this.”

When Standard Property was visiting she found there to be more than a touch of Cluedo about the drawing room. As Mr Bradley was pointing out Pearson’s signature “FLP” inlay, she fully expected the lights to suddenly go out, and Mr Bradley to ‘vanish’ behind one of the hidden panel doors or secret cubbyholes. She would not have been surprised if one of the two fireplaces — there is one at each end — was also able to spin round.

Originally, the room next door to the living room was a full-size billiards room that was later split to provide another staircase and a “winter living room”.

There is also a conservatory on this side of the house, as well as a ‘second kitchen’ which is ideal if you have caterers for your gathering. Who’s to say the house wasn’t an inspiration for the 1926 board game after all?

But don’t be fooled into thinking this is a ‘winter house’. A York stone terrace wraps around the property on three sides for outdoor entertaining, and incorporates two loggias, one of which directly faces the swimming pool.

The pool area has recently undergone extensive refurbishment, including the installation of a new pool liner.

The other standout feature is the aforementioned Griggs & Mackay kitchen on the other side of the house, with its adjacent snug. Both rooms face a section of lawned garden and have French doors out to the York terrace.

Kitted out with an extensive range of bespoke oak cupboards and drawer units, including ‘hidden’ walk-in pantry, granite work surfaces, not one but two dishwashers, and inset porcelain twin sinks, there is all kinds of gadgetry to coo over here.

“I love the kitchen,” says Mr Bradley. “It’s such good quality and the style is in keeping with the look of the rest of the house.”

If you’re a Great British Bake Off fan, you’ll fall for the cream five-oven gas Aga here. But if you’re no Mary Berry it’s no problem as the central island has a separate combination oven and minimalist-style gas hob for your use.

Upstairs are eight/nine bedrooms over two floors, including a lovely master suite which comes with its own bathroom and large dressing room, plus a guest suite with its own balcony. As if this wasn’t enough accommodation, in the front driveway is a triple garage block that could easily have living quarters incorporated if needed.

Unlike some of its Grade II-listed neighbours, Swanston House is unlisted, which makes it a very interesting prospect indeed for a family looking for somewhere to live — or indeed to entertain.

“Swanston house is a fine example of its period with elegant rooms and proportions set in a very private position within the heart of this historic and highly sought-after village,” adds Katherine Singleton. “The gardens are an absolute delight in all seasons and enjoy the southerly sunshine. Anyone owning this property is a custodian of a very, very important and elegant village house.”

We’ll raise a glass to that.