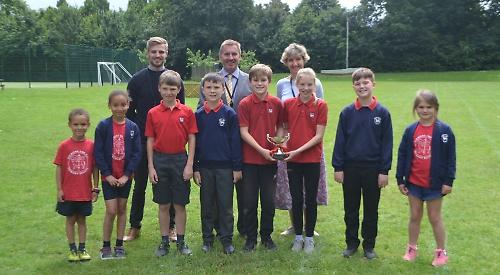 THE new headteacher of Kidmore End Primary School wants to make the school the “centre of the village”.

Andrew Griffin started at the school in Chalkhouse Green Road earlier this month and succeeds Linda Hull, who stepped down from the role after eight years.

The 52-year-old, who is originally from Australia, said he is “loving the role” and the staff, students and children have all been “fantastic”.

He said: “My highlight so far has been the evening singing service at the church next door which was really lovely. We also had a fabulous sports day on Friday last week which was live streamed. It was an opportunity to get a YouTube channel going.

“Because we are a small school we need to aim big but we also have the opportunity to give that individual attention to the children and families as well.”

Mr Griffin, who lives in Maidenhead with his wife Hazel, 50, their two children and five-year-old retriever, Toby, first went into teaching at The Hutchins School in Sandy Bay, Australia, for six years.

He decided to move to the UK after many holidays and worked in various schools before becoming the head of Hillside Primary School in Lower Earley in 2005.

“I wanted to make a difference to the children,” he said. “I believe in education, it’s the stepping stones to the careers you go into.”

The head has already planned two events ahead of the school reopening after the summer holidays. Residents and staff will get together on Monday, August 23 and Tuesday, August 24 to fix up the early stages area followed by a barbeque.

The parent association, KESA, has donated £4,500 to buy a magnetic water wall, mud kitchen, activity bench and a play hut for the space.

On Friday, September 24, a parent-student event will be held to celebrate the easing of coronavirus restrictions.

Two new teachers will also be joining the school in September, Vanessa Smith, a year one teacher, and Sam Heritage, a year five teacher.