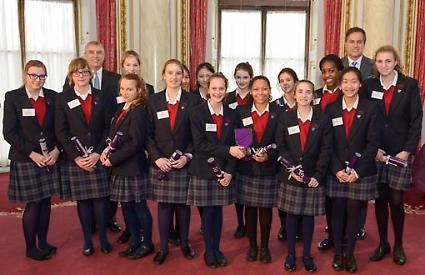 A TEAM of girls from Queen Anne’s School in Caversham has won the Tycoon in Schools Award.

Members of Back Into Vintage were presented with the award for innovative idea and business concept at a ceremony at Buckingham Palace hosted by the Duke Of York, patron of the Peter Jones Foundation, which organises the competition.

Hundreds of schools entered the competition, which aims to encourage and inspire young people to start a business while at school. Back Into Vintage upcycled by creating vintage artwork and retro products, such as fruit bowls made from antique records.

Orla ODoherty, head of business studies and economics at Queen Annes, said: It was a privilege to be invited to Buckingham Palace on this special day and I am delighted to see Back Into Vintage receive the award. All the pupils have worked extremely hard and the team really deserves this fantastic achievement.

The Duke said: Congratulations to all who took part  you came up with som really interesting ideas that have sparked a lot of peoples imagination.

I would like you to realise that all is in the realm of possibility and wish you the best of luck for the future.

Mr Jones said: All the teams worked so hard and I have been bowled over by their enthusiasm and achievements throughout the competition.