Orchestra’s was a classic ‘last night’ 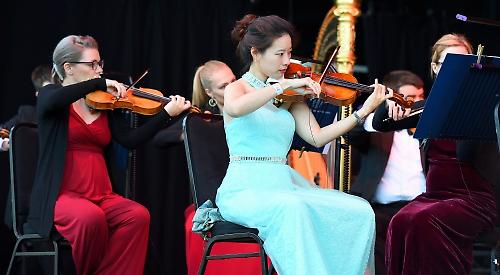 CLASSIC FM presented “A Night at the Movies” with the Royal Philharmonic Orchestra performing classical pieces used in iconic films of the last 50 years — together with some of the greatest Oscar-winning original soundtracks.

This, the final concert on the Floating Stage, was a vibrant occasion, dispelling any notions of classical music being outdated or unpopular with the masses.

The RPO, one of the most versatile and forward-thinking symphony orchestras around, played superbly under the baton of conductor Pete Harrison.

Each piece was introduced by Classic FM presenter Aled Jones, who, as a musician of outstanding pedigree himself, kept the audience entertained and informed.

The overture from Rossini’s William Tell was an excellent opener and had the audience bobbing along to its well-known theme (used in A Clockwork Orange and National Lampoon).

In contrast, the brass section displayed its mighty power in Jerome Morass’s theme from the epic The Big Country and later on in Star Wars by that master of movie themes, John Williams.

Another Williams masterpiece, the heartbreakingly simple yet touching theme from Schindler’s List, was exquisitely played by violinist Johanna Röhrig.

Soprano Francesca Chiejina, one of Opera Prelude’s rising stars, is definitely one to watch. Her luminous voice soared in a glorious rendition of O mio babbino caro (“A Room with a View”).

Joined by Rosie Clifford (mezzo), the pair then blended beautifully together on Offenbach’s Barcarolle, during which, as if on cue, a parade of boats glided serenely by on the Thames.

Pianist Oliver Poole stunned the audience with his electrifying performance in Richard Addinsell’s rarely heard Warsaw Concerto, a piece full of Rachmaninov-like sweeping melodies in which the RPO strings played with lush abandon and just about managed to keep up with Poole’s virtuosic displays on the keyboard.

Mussorgsky’s Night on a Bare Mountain (Fantasia) gave the orchestra an opportunity to demonstrate its more serious, dramatic side.

The stage lights glowed deep red as the ominous atmosphere of the opening theme gave an eerie indication of what was to come. There was some fantastic rhythmic interplay between percussion, notably cymbals and woodwind, which created a real sense of danger and suspense.

Drawing the concert to its conclusion, Pete Harrison directed the RPO and audience together in Elgar’s Pomp and Circumstance March No 1.

Here, in true British “last night” style, the audience clapped along, cheered and sang their hearts out.

To complete the festive mood, a giant blue, inflatable octopus suddenly appeared in the crowd, while an enormous bright yellow blow-up duck made its way, entirely appropriately of course, down the river.

Following all the fun and games was the absolute finale — Handel’s “La Réjouissance” from Music for the Royal Fireworks — the performance synchronised with a spectacular fireworks display which illuminated the night sky and provided a perfect end to the evening. Looking forward already to July 2020 ...