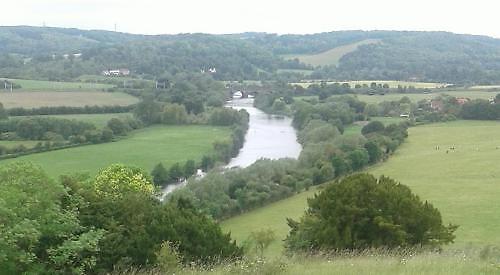 ONE of my mother’s little robins is looking distressed. Hugging the side of my right foot, he is not interested in any food, he just sits beside me, his eyes closing now and then, his tiny body puffed up and breathing heavily.

He was fine yesterday so I’m worried for him. He may have eaten something bad or been attacked, who knows?

I leave some water for him knowing that there is no more that I can do so put my faith in an avian God.

Goring is a great little village. Dave Kenny, Alan Pennington and me are on an excursion to Hartslock nature reserve (after a good lunch at the Catherine Wheel).

We head down a single-track lane past Gatehampton Manor and stop where the road runs to gravel. A short walk along a narrow lane leads to the reserve entrance and a steep hill. I have not been here for years but feel as if I’ve never been away.

The first few acres of meadow are first rate. Yellow-rattle (Rhinanthus minor), a semi-parasite, abounds, common spotted-orchids (Dactylorhiza fuchsii) are in flower and the fruiting capsules of cowslip (Primula veris) are all around.

The views are already good but will only get better. A buzzard briefly hovers above and then moves on. We take the right of two gates and clamber up a steep slope.

As we clamber uphill, we are presented with a swarm of orchids. The monkey (Orchis simia) and the lady (Orchis purpurata). The former is dainty, the latter strong and tall. Here there are many hybrids that I believe have been recorded only at this glorious spot.

Both the monkey and the military orchid (Orchis militaris) used to be relatively common flowers on our chalk hills, their range stretching between Marlow and Wallingford as described in David Lang’s Orchids of Britain.

There are still some beautiful examples of true monkeys and ladies to admire. The monkey was first recorded in 1660, the lady in 1666 in Kent, its stronghold. Before stumbling across my first plant at Hartslock 20 odd years ago, I’d only known this gracious plant from a woodland glade at Hardwick. I wonder what truly defines a species with all this hybridisation.

We are amid a partially lost world with its rich tapestry and colour. The flowers of the pyramidal orchid (Anacamptis pyramidalis) are opening and rock rose (Helianthemum nummularium), with its fine yellow petals, joins the throng of chalk grassland specialists.

A proud beech stands with its neighbour, a clearly struggling juniper.

The views from here are outstanding. To the west Old Father Thames flows under Brunel’s railway bridge, to the east downstream to Mapledurham.

My wish is to spend more time up here free from the vagaries of quotidian life. I must and I will. This is not simply a wonderful, flower-rich gem but to me something akin to a terrestrial heaven. As we depart, a light rain falls but do I care?

Roll on three days and the robin still looks scruffy but he is full of beans once more, eating well and feeding his second brood. I’m very happy for him.

Nature can be cruel but there are natural born survivors, both orchids and birds.