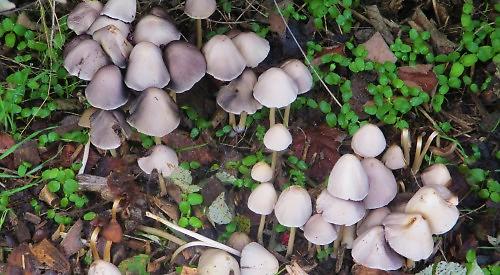 WORMS. Yes, I’ll say that again, worms, or more specifically, earthworms. Without these simple creatures we’d have no soil. Some people recoil at the thought of a large squirming invertebrate at the end of a garden fork but our planet could not exist without them.

An earthworm will thanklessly risk its life to emerge in the autumn twilight or dawn to search, find and drag down as many autumn leaves as it can muster into the ground, consume them when they have decayed on an industrial scale and then, hey presto, we have aerated soil and a happy worm to boot.

Earthworms are such interesting creatures. Hermaphrodites (they have both male and female sex organs), they breathe through their skin and have a hydrostatic or watery “skeleton” that enables them to wriggle and squeeze through the smallest of apertures.

It is what worms provide in conjunction with fungi and all their hidden thread-like structures or hyphae that lie below ground and sporadic fruiting (mushrooms and toadstools) that support all terrestrial life.

Without fungi and worms our world would be an uninhabitable, desolate and permanent desert, so give them some respect. We simply cannot live without them.

Earthworms are also predated on, of course. Red kites can’t get enough of them and moles, once called mouldywarps (meaning earth-throwers) with their double powerful thumbs, burrow like crazy in their relentless pursuit of their prey.

The boars and sows only meet briefly to mate, otherwise the curse of the croquet lawn leads a solitary life.

My friend Matt Coome calls and we agree to explore part of the southern Chiltern landscape. We leave his car near the Bottle and Glass pub at Binfield Heath and stride out along Bones Lane.

Only a few years ago this track was so muddy as to render it near impassable. Today it has been carpeted with a deep layer of wood chippings and what a welcome improvement it is. I can only assume that the Phillimore Estate is responsible.

The first tree that I notice is a huge, ancient crab tree laden with fruit. The little apples would make a glorious jelly to eat at any time of year. The path that leads to Bones Wood is full of fungi and this year is one of mycological delight, a fungal bonanza no less.

There are edible and very tasty parasol mushrooms to either side, some false chanterelle with their colourful orangey gills and so many other species, grey, brown and fairytale-like so beautiful in structure, some with a faint but siren-like scent.

I’ve forgotten to bring my identification book and could kick myself.

We meet the woods, Crowsley Park to our left and Bones to our right. There is still much bracken here and it is quite quiet apart from the occasional caw of a crow and shriek of a jay.

A dead spruce is starting to rot with the assistance of another fungus that lends it the appearance of a sylvan, vertical leopard.

A kite’s nest, big, heavy and broad, sits high above.

There are some wonderfully contorted oaks, ancient silver birch trees and silvery-barked hornbeam along the perimeter of Crowsley Park, its boundary delineated by an often breached and hastily repaired wrought iron fence. Crowsley is quite beautiful but has associations with the dark arts. The Baskerville family lived here for years and Sir Arthur Conan-Doyle was a regular guest. I often think of it as Aleister Crowley Park.

We move on aside Redhill and Gillsmithers Woods then take a really pleasant descent into Harpsden valley.

We trace the road eastwards but thankfully it is not too busy. Some elegant oak and ash stand either side of the road. Male ferns, bramble and spindle with their colourful berries, fill the gaps.

I stop to look at a flock of inquisitive sheep. They think I’m going to feed them as they crowd around the fence. Matt points out some deer on the opposing hillside. A fungal fairy ring sits in short turf at our feet.

We head back uphill through these magical woods as the pathway criss-crosses the stout tree roots of beech, field maple and sycamore to arrive at our entry point.

Another sublime walk all the better for the weather. With only one brief shower, it has been another rewarding few hours outside in our unique corner of the world. I want for no more.