I’ve always been inquistive... perhaps that’s why I love nature 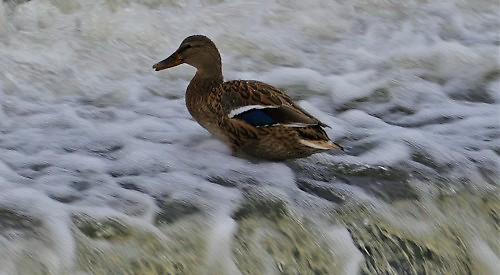 I HAVE to make an early morning dash to one of the pharmacists in Caversham.

On my way along Prospect Street, I notice that on the corner with Oxford Street yellow corydalis (Pseudofumaria lutea) is still in flower and that ivy-leaved toadflax (Cymbalaria muralis), the signature garnish of the Ivy Restaurant in Covent Garden, is still flourishing in the crevices of a garden wall next door to the house where I was born many years ago.

They are both enchanting and resilient garden escapees.

Returning to my mother’s house via Balmore Walk, I notice cow parsley, nettle and feverfew, the latter in flower, are already growing anew and preparing themselves for spring.

With cold weather approaching, are they confused or do these plants know something that I don’t?

Later, I meet up with my new friend Rosemary Henderson and we take off for Mill End and Hambleden with a view to crossing the extensive lock on the Thames and then stroll along the riverbank to Aston.

The public car park on the way to Hambleden village is closed. Apparently a film-maker is denying the public access to a public facility. Police cordon tape declares “no entry”. Is this legal?

It is the same scene in Hambleden. The whole village and pub are shut with more police cordon tape. I try to enter the Stag and Huntsman but it’s shut. Must be worth a pretty penny to the business then.

We take a look at the course of our once beautiful chalk stream, the Hamble Brook, which has dried up. I am stunned.

We have to change tack and head back to start our walk from Aston outside the Flower Pot pub. What a poetic and quintessentially English location.

As we step out of Rosemary’s car, we are greeted by the squawks of ring-necked parakeets in the trees above.

This is an invasive but handsome little parrot that has made a new home here. I simply don’t know what to make of this development.

We head eastwards towards Culham Court. Now the home of wealthy Swiss financier Urs Schwarzenbach, his 650-acre estate on the Berkshire bank of the Thames is rather interesting.

The owner probably has no problem with the public rights of way that criss-cross his property so Rosemary and I are making use of them.

A vast herd of white deer meander meekly around the grounds. Groundsmen manicure the lawns. A folly in a dip lies near a small but handsome chapel.

We admire the gorgeous views that we are allowed and then retreat to the pub for lunch. I do love a bacon sarnie and a well-kept pint, even with a stuffed boar’s head looming above my head.

But that’s not enough. We leave the warm confines of the Flower Pot and enter Ferry Lane towards our original chosen entry point at Mill Lock.

The coffee-coloured river is flowing as if in a hurry to reach the sea. The ground is rather sodden along the riverbank as we head to the lock.

The sky darkens and mallard ducks seem to be laughing at the two of us as we soldier on. A lovely little dog drops a tennis ball at Rosemary’s feet asking her to join in the fun.

The water that flows across the weir by the lock-keeper’s cottage is thunderous. A brownish spume floats away from the main flow.

An ancient walnut tree with deeply fissured bark stands oblivious to the water’s surge. A female mallard somehow has a foothold on part of the weir, feasting on aquatic vegetation.

We head back but take another path southwards and on towards Aston. We pass some aged willows that are host to other trees growing halfway up and out of their trunks.

Two swans are in a stream that feeds the river. They look happy and I bet that this is where they will nest next spring. Such graceful birds.

Heading back towards Caversham and up Aston Lane, we have to slow down as a covey of confused red-legged partridge are wandering across the road.

One alarmed bird trips over comically and then scuttles off into a hedgerow.

We descend White Hill, which is always a delight, especially now with the beech trees turning colour.

I have always been inquisitive and remember that when I was very young my mother once caught me with a hammer cracking stones in half to see what lay within.

“Is this the countryside,” I would ask as my father drove us past a lone oak tree on the brow of Surley Row on the way to Emmer Green in his new Triumph Herald.

I haven’t changed but time seems to pass so quickly now as I get older and the seasons seem to whizz by.

My mother told me that when I was nearly four years old I asked her where yesterday had gone. Her reply? “I don’t know but it will be back again tomorrow.” Such wisdom!

So let’s enjoy every day that we can, especially when communing with nature. Time may seem to pass much faster as we grow older but there’s still plenty to see every single day.

Rosemary and I have had a great day. I’m sure that there will be many more to come.