Tales from the riverbank... how much there is to see by the Thames 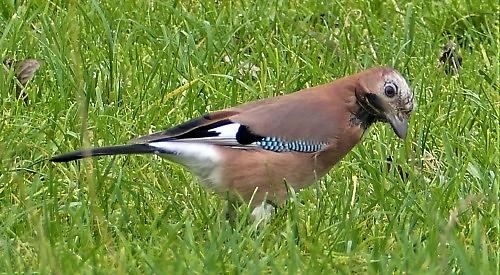 A SONG thrush sings its repetitive, beautiful but rather mournful song early this morning. It started its solitary dawn chorus some days ago.

I love this speckle-breasted bird but I have to admit that its tune always makes me feel just a little bit sad.

Blackbirds are quiet today but the male will sing its lovely song again come spring.

A few hours later my friend Rosemary Henderson is driving us towards Henley from Caversham. Approaching Span Hill, she informs me that this part of the road is always good for spotting the odd sparrowhawk or other raptors and there is one on cue, a buzzard atop a telegraph pole surveying its territory on the hill’s crest.

When I was a child there were no buzzards to be seen hereabouts but slowly they have spread eastwards from the West Country. They are handsome birds, slightly smaller than red kites with a fan-shaped instead of forked tail and sporting yellow legs. They are chunkier birds, too, and variable in chest colour, sometimes dark, sometimes pale.

Unlike the scavenging kites, they are accomplished rabbit hunters. We park and then walk down to the river along New Street. The water is high at Riverside.

An imitation plastic owl sits nailed to a post on a jetty but does not seem to deter black-headed gulls from perching in numbers on the solitary boat that wobbles about on its mooring beside the river’s rapid flow.

Crossing the elegant and historic Henley Bridge, the true ferocity of the Thames’s progress is obvious. It is quite something as it demonstrates its hydrolic power as it eddies and swirls, a true force of nature.

Our walk proper starts on the Berkshire side of the river from Leander Club heading downstream and it’s obviously a popular route. Runners, dog owners, walkers and rowers with their attendant cyclist coach are enjoying themselves as we march along Henley Reach.

Canada geese have deposited some early green Christmas presents that we avoid.

The path leads us on. St Mary’s Church fades into the distance and Temple Island looms ahead. Elevated beech woods frame the panorama. On the north bank a pair of Egyptian geese drop down from above and splash-land heroically amongst their North American pals. A sole cormorant dives into the swirling water. A great-crested grebe does the same.

As we proceed towards Remenham, Rosemary draws my attention to a recently flooded area to our right. She tells me that this marshy spot is full of the nationally scarce, native but locally flourishing Loddon Lily (Leucojum aestivum). Apparently the scent is quite exquisite. One to check come springtime then.

We look across the river to where a footbridge still lies unrepaired near Fawley Court. It has not been fixed in more thna a year. Why? I’m glad that we’re on the Berkshire bank.

We take a turn to the east to climb up some steep steps, cross Remenham Lane and uphill once more past a row of trees and into a small field that leads to glorious views.

Mistletoe swings gently in the treetops. Do we hear a skylark? I’m not so sure but Rosemary insists that they breed here so hopefully there will be many come spring.

There is plenty else to see and hear. Two kites mew above and a robin sings its heart out in a hazel bush.

From a high point in an open, rounded hill much of the surrounding landscape is revealed. The extensive view is new to me and I simply love it — Henley Park just shy of north and the heavily-wooded hillsides beyond Hambleden and onwards past Skirmett, Turville and Ibstone straight ahead. Wow!

I venture that this open country could be perfect for lapwings. Again we’ll have to check come spring when the winter wheat or barley begins to rise. Remenham Church Lane is close and visible to the east.

We retrace a few steps downhill and enter a right of way to follow a path through a small patch of woodland above Remenham Court.

Apart from a few sturdy old oak, cherry, yew and beech, young ash and sycamore dominate the understorey that reveals wood spurge, common figwort, dog’s mercury and buckler fern as well as many spurge laurels (Daphne laureola), a nationally scarce but local plant and an indicator of old woodland.

Although the majority of the trees are young, there is plenty of evidence that the catastrophic storm of 1987 provided space for young saplings to fill the void left behind. This “young” wood is actually much older than it appears.

As we descend through the trees, we have to navigate a series of stiles to return to “civilisation”. The first one is fine despite my sciatica. We stroll past a steep slope to our right on the way back towards Henley.

Remenham Wood lies uphill to the east, so inviting. We’ll investigate it another time as Rosemary has seen a broad carpet of bluebells up in these woods previously. I’m already looking forward to my first encounter.

Curiously, we stumble upon an evergreen or holm oak. A native of southern Europe, it seems to be holding its own on the steep incline.

As we enter a meadow on the way back to the river, Rosemary spots a jay a little way ahead. They are such handsome, mischievous but intelligent birds.

For me the last stile is murder. Rosemary has to manoeuvre my leg over the top. Relief and release.

Eventually we make it back over the bridge and into town. A well-deserved pint is had at the Catherine Wheel pub where we pore over my OS map and discuss our next foray.

After a quick whizz around the shops, we stop at the car park near Marsh Lock. Rosemary introduces me to the largest silver maple that I have ever seen. A native of North America, it is truly gargantuan with a trunk nearly the width of a small car.

We walk to the lock proper, ascend the initial ramp and on to the level walkway. Dependent on weather to come, Mill Lane may flood. Let’s hope not.

Marsh Lock is a very special place for Rosemary, mine is at Shiplake for similar reasons. We all have a personal place, I think, and on a clear, fine day and with good company our stories can be shared.

On the way home the buzzard that we saw earlier is again on its favoured post studying the valley below. Has this bird moved at all, I wonder?