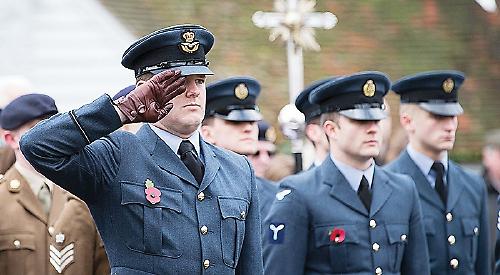 REMEMBRANCE Sunday was marked by communities across South Oxfordshire and Berkshire.

Thousands of people attended services to remember those who made the ultimate sacrifice. Many featured a parade of veterans and a two-minute silence at 11am.

The war memorial in Whitchurch Hill was rededicated as part of a joint service with Whitchurch.

It was severely damaged in a storm in January 1990 and for 27 years has been half its full height of 17ft.

The memorial has now been restored to its original design by Goring Heath and Whitchurch parish councils at a cost of £13,000 thanks to a grant from the War Memorial Trust and donations.

On Sunday, about 90 people gathered to hear an address by Peter Dragonetti, chairman of Goring Heath Parish Council.

He said: “It is now 96 years since this war memorial was originally built. Dedicated in 1921, it had taken nearly three years from when the idea was first proposed at the end of the war.

“At the dedication ceremony on Sunday 20 November, 1921, there was a large crowd here from both Whitchurch Hill and Whitchurch, with many ex-soldiers who had served in the war among them. There were also relatives and friends of those whose names are on the memorial.

“Today, to us, these names are no more than names but in 1921 these were the sons, the husbands, the fathers of those who gathered here whose loss was real, who would never see their sons grow up, their husbands grow old or their fathers come home.

“For us today, perhaps even the names of our own relatives that were lost in the wars are now half forgotten, names told to us by parents and grandparents 50 or 60 years ago, names that have passed into history.

“But today we honour and remember them all, the men of these villages, and our own relations, who gave up their lives for their country. Our restoration of this memorial honours them and it honours those who came together a century ago to place this memorial here.”

Prayers were led by the Rev Claire Alcock and the names of the fallen were read aloud by David Giles.

The Last Post and Reveille were sounded by Stewart Lewins, musical director of Pangbourne Silver Band.

In Benson servicemen and women from RAF Benson were among around 100 people who took part in the remembrance parade.

They were joined by members of the Benson and Ewelme branch of the Royal British Legion, veterans, scouts, cubs, guides and brownies.

The names of the fallen were read out before a a reading of The Exhortation.

A bugler from Roke and Benson Band sounded the Last Post and standards were lowered. There was a two-minute silence at 11am and Reveille was played by the bugler.

The Kohima Epitaph was read by Pete Eldridge, treasurer of the Legion branch, before a fly-past by two helicopters, a Chinook and a Puma, from the RAF base.

More than 20 wreaths were laid by organisations including Benson Parish Council, Benson Women’s Institute and the Benson Boys’ and Girls’ Football Club.

After the service, the parade marched to St Helen’s Church for the remembrance service, which was led by Rev Patrick Gilday, rector of Benson and Ewelme.

Wg Cdr Donal McGurk, who laid a wreath in Benson, said: “It is a genuine honour to stand among the people of the village of Benson, representing the Royal Air Force and, more importantly, RAF Benson on this annual day of remembrance. I live in Benson village and I feel very privileged to see the support that RAF Benson receives from the local community.

“It is always a poignant time of year, made all the more so when listening to the list of those who gave their lives in the service of this country, from the First World War right through to the most recent conflicts, including friends of mine.”

Four services were organised by the Shiplake and Dunsden branch of the Royal British Legion.

These began with a sung Eucharist at All Saints’ Church in Dunsden, which was attended by about 30 people.

Then about 20 people attended a service at the war memorial on Dunsden Green where the Legion laid a wreath as did Councillor David Woodward, chairman of Eye and Dunsden Parish Council.

Another wreath was laid on the plaque at the village hall for the poet Wilfred Owen, who lived in Dunsden before he was killed in the First World War.

About 100 people attended a remembrance service at St Peter and St Paul’s Church in Shiplake with a two-minute silence at 11am.

Afterwards there was a short service at the war memorial in the village, attended by more than 60 people, including members of the Shiplake College Combined Cadet Force and beavers and scouts, all in uniform.

At both the services in Shiplake Bobbie Howard-Jones, 15, a student at Shiplake College, played the bugle.

Rosemary Jones, organiser of the Shiplake Poppy Appeal, said: “The bugler did very well, especially as he was quite young. All the events were well attended.”

More than 180 people gathered at the war memorial at St John the Baptist Church in Kidmore End. There was two minutes’ silence at 11am and a bugler played the Last Post and Reveille.

Wreaths were laid by Kidmore End and Sonning Common parish councils, both villages’ primary schools, the scouts, cubs, brownies and the Kidmore End branch of the Royal British Legion. This was followed by a service inside the church, where every seat was taken.

Churchwarden Robert Lynch said: “It was a very moving service and it was very well conducted by our rector. More people seem to be coming each year.”

In Nettlebed there was a parade from the village club to St Bartholomew’s Church for a memorial service where the standard for the village’s branch of the Royal British Legion was dedicated.

The congregation moved outside to the lychgate war memorial where Reveille and the Last Post were sounded, wreaths were laid and the names of the fallen were read out.

After the service 36 people attended a lunch at Nettlebed Community School. Jim Bowers, chairman of Nettlebed Royal British Legion, said: “The church was fairly full. All the traffic stopped for us for 10 minutes, even though there was no official help. We just put a cone out and all the cars stopped without much fuss, which we were very pleased about.”

They were led by the Reading Salvation Army Band as they marched along Pearson Road and High Street to St Andrew’s Church for a remembrance service where wreaths were laid and the names of the fallen were read out.

Mark Green, secretary of the branch, said: “It’s important now, as ever, that we remember, especially with ongoing conflicts.

“The village primary school does a lot of work on remembrance, which is important as it helps provide continued support for the Royal British Legion.”

More than 1,000 people attended the remembrance service at Christchurch Meadows in Caversham.

There was a parade to the war memorial by members of Caversham Royal British Legion and community groups.

The service was conducted by Dr Alison Johnston, of Caversham Park Church, and music was provided by the Earley Salvation Army Band.

A bugler played the Last Post and Reveille and there was a two-minute silence.

Afterwards 27 wreaths were laid together with poppy crosses and other personal tributes.

She said: “We had a full public address system after having problems last year with people being unable to hear. We were delighted with how it went.”

In Watlington there was a parade from the town hall to the war memorial in High Street involving members of the Royal British Legion, veterans and community groups.

They then gathered around the monument with members of the public standing behind. The Last Post and Reveille were sounded by a bugler from Watlington Concert Band and a two-minute silence was observed during which standards were lowered.

Wreaths were laid by representatives of the police, fire service, Royal British Legion and other groups. Some people saluted after laying their wreaths.

In Wargrave more than 750 people attended the remembrance service at the war memorial on Mill Green.

There was a parade along High Street to St Mary’s Church for a service led by Rev Hugh Barne, assistant minister, while the vicar Rev John Cook preached.

The congregation moved outside to be joined by other residents for a commemoration. The roll of honour was read out and the Last Post was sounded.

This was followed by a two-minute silence, The Exhortation and the Kohima Epitaph before Reveille was played. Wreaths were laid and poppy crosses planted.

The music was led by Saint Sebastian Wokingham Band and included the National Anthem.

About 100 people from the congregations of All Saints’ Church in Peppard and St Nicholas’ Church in Rotherfield Greys came together for two services.

There was a short service at the war memorial in the grounds of the Peppard church organised by the Peppard and district branch of the Royal British Legion.

The Last Post was sounded and a two-minute silence observed at 11am. Wreaths were laid by the Legion, Peppard Parish Council and on behalf of the church.

A service was then held inside the church.

Just after noon a second service was held at the war memorial in Rotherfield Greys, where the parish council and the Legion both laid wreaths.