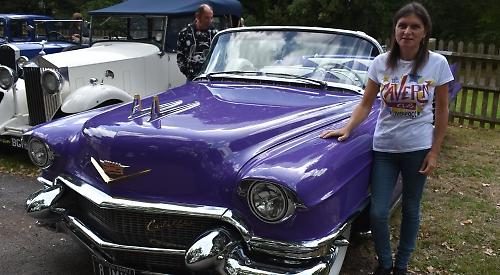 MORE than 150 people attended a celebration at Kidmore End War Memorial Hall to mark the centenary of the end of the First World War.

The hall was built in 1922 by volunteers to honour the 35 villagers lost in the conflict. It also honours 13 residents who died in the Second World War.

Saturday’s event raised more than £600 which will go towards maintenance of the pavilion in Reades Lane.

Attractions included a classic car display, tractor and trailer rides, circus entertainment and a fly-over by a Tiger Moth.

First and Second World War memorabilia were on display, including photographs and information from when the hall was built.

There was live music from musician Sam Brown and her ukulele players. She used to live in the village before moving to Dorset and returned specially. A cake stall with tea and coffee was run by members of Sonning Common WI.

Erika Yarrow, one of the organisers, said: “It was a real success. We managed to raise funds for the hall and it was a great time for the community to come together and enjoy themselves.

“Sam Brown and the band were brilliant and there was a nice collection of classic cars. It’s the centenary of the armistice and we felt we should do something to commemorate that as it was local men who died and are remembered with the plaques on the wall.

“It was also a great opportunity for people to see our facilities and for us to market the hall to the community.”

Carole Lewis, chairwoman of the parish council and a hall trustee, said: “People came and went throughout the day but it was probably busiest around the time Sam and her band performed.”