Medals, munitions and memorabilia from conflict displayed at village hall 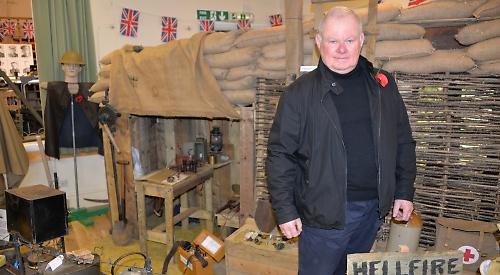 A SECTION of a trench, part of a surrendered U-boat and some medals were part of a First World War exhibition held at Checkendon village hall.

The show was staged over the weekend by the village’s history group to mark the centenary of the Armistice and featured memorabilia from the period and Edwardian artefacts.

It was opened by Henley MP John Howell.

Tim Corbishley, a member of the group, said: “We did an exhibition in 2014 and the intention was always to do another one four years later.

“This was bigger and grander and a lot more interesting stuff turned up. It was mainly from local people and contacts of mine who I knew had interesting things.

“We had some original trench maps and letters from people who were planning the war and the bridge telegraph from a U155 U-boat.

“We also had several sets of medals and out of the 11 casualties from Checkendon we had two death plaques and the related sets of medals for Sydney Bowles and William Warman.”

He said the  exhibition proved popular, adding: “We had an almost constant flow of people and every time you looked round there were a dozen to 20 people in the room. I think people were amazed that we could put on such a splendid exhibition in such a small village. It’s the last time all this stuff will be together in one place, I suspect.”

Amateur historian Mike Willoughby, from Woodcote, brought a number of exhibits, including the trench section and dugout which he built  five years ago and had previously shown at commemorative exhibitions in Henley. He said: “There were also 10 boards with the details of the soldiers from the local villages who died during the First World War, replica guns and general arms and munitions and soldiers’ kit.

“I thought the exhibition was amazing, as was the effort that everybody went to, especially Tim. The footfall was incredible.

“It’s all very well to talk about the war but this allowed people to actually get hands-on and see what the soldiers had to cope with and how and what they ate. It makes them much more aware of how the soldiers suffered.”

The church lychgate war memorial records the names of the 11 villagers who died in the conflict.

Unusually for a casualty, Mr Bowles is buried in the churchyard. He had been given two weeks’ leave just after the Armistice.

He took almost a week to reach home and died of influenza three days later. He was 26.