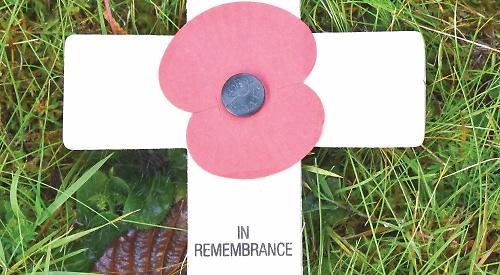 TWO dozen Henley men who served in the two world wars have been honoured.

Members of the town council, which owns Fair Mile Cemetery, decorated their graves with poppy crosses to mark their sacrifice in the run-up to Remembrance Day.

Some of the men were killed during combat while others died later as a result of their injuries of illnesses, such as influenza or pneumonia, because their service severely weakened their health.

The fallen include Gabriel Machin, whose grandfather, also called Gabriel, launched the butcher’s shop of the same name in Market Place, Henley, in 1881.

Gabriel jnr, a former gunner in the Anti-Aircraft Company, died in February 1919.

Town clerk Janet Wheeler came up with the idea of honouring the men and hopes that it will become an annual tradition.

She said: “It’s a nice gesture for families who don’t live in the area but come back around Remembrance Day.

“It’s important that they know the council, which represents the community as a whole, continues to respect the men’s ultimate sacrifice.”

The graves were located by the council’s cemetery administrator Leena Wisely with help from amateur historian Mike Willoughby, from Woodcote, founder of the Lest We Forget project to honour every Henley serviceman who died in the First World War.

Mr Willoughby said: “I was very happy to help as this is a good idea.”