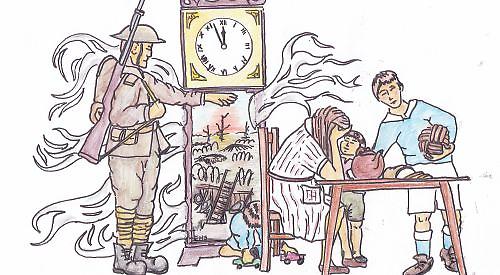 A MELLOW chime echoes along the hallway. On the last midnight stroke, the pendulum door of a grandfather clock opens. White mist swirls out and starts to take form — Tom Buchannan’s ghost is returning.

Tom is in his uniform, the newly earned sergeant stripes bright against the ragged and muddy khaki. He touches the fawn flowered wallpaper with fingers cut and scabbed with dried blood. His scuffed boots, soundless, as he walks over the threadbare carpet runner.

There is no need to open the parlour door; he can pass through.

The room is just as he remembers it and, sitting in his armchair, he slides his fingers through the cloth.

The round table shines, the sofa set precisely at an angle to the fireplace. He looks for his pipe; of course, it wouldn’t be here now.

The curtains are drawn — is this in respect for him? Surely not, although today is the anniversary of his death on July 1, 1916.

Tom moves to the aspidistra, pleased to see it free of dust as his fingers pass through the leaf.

Amelia is upstairs. She is his reason for coming back; he cannot pass over until he has seen her one last time.

Tom counts 13 stairs. When he had carried Amelia up them on their wedding night, they had laughed at superstition, calling them their lucky 13 to heaven.

Amelia lies in the double bed on the left, her side from their first night, a daisy patterned nightdress buttoned to her throat and covering her arm to the wrist.

Her breathing is soft. He remembers her little whimpers when she is dreaming. She always said they were happy moments to store away for a rainy day. God, she had needed them this past year.

Tom lies down beside her. Why couldn’t he have been whole for just this one time? To hold her, feel the softness of her skin, the warmth of her lips. But it was not to be and he must be content just to watch her sleep.

The light comes early and Amelia wakes. She throws back the cover. Tom is shocked by her indifference. Can she not sense him? Has her love not been strong enough to feel he is there?

She soaps her face at the washbasin. The oval shape is thinner and her cheeks pale. Is her life so much harder without him?

He follows her into his sons’ bedroom and stands by the window. How they have grown. The three heads have his brown colouring and their heights tell him which are Gordon, Dougie and Roy.

All three still sleep in the iron bedstead he had bought from a rag-and-bone man on his way home from the factory before the war. Their feet had only reached halfway down the mattress; now Gordon’s almost touch the bedrail.

Watching them dress, Tom wonders why they struggle to get into their clothes, then realises they are far too small. Why cannot Gordon’s be passed down?

In the stronger light he sees Amelia’s dress is faded and the elbows are threadbare. Did Amelia not have enough money? There is nothing his ghostly pockets can provide.

Things are not going well. Tom struggles with his conscience. Oats, grey without milk, suffice for breakfast. Not a slice of bread to fill their hungry tummies.

After the boys have gone to school, Tom sits in his fireside chair to watch Amelia.

She fetches logs from the garden and piles them by the black iron range, then lifts the round lid with an angled handle. The flames flare as each log is dropped in and the fire comes to life. She waves red chapped hands in front of the grill.

Tom cannot feel the warmth, but to see his wife’s joy comforts him. All morning he follows her: making the beds, scrubbing the front step.

In the hall, Amelia stops at the grandfather clock — his wedding present to her — and runs her hands over its curved shape. Raising a finger to her lips, she kisses it and places it on the glass face.

Suddenly, she leans her head on the rosewood panel and gulps of tears and sorrow escape from her shaking body. Tom is overwhelmed. He has longed for this day, to be with her, their final time together. He wants to take away happy memories.

But real life is too practical. Fairytale endings belong in books.

Amelia does not eat at noon, just drinks a pot of tea. Tom pokes his head through the larder door. There are only a few essentials. How is she managing?

The clock chimes two and she puts more logs in the range, opens the oven door to test the temperature. A smile lightens her face and erases the lines on her forehead.

Moving quickly, she collects flour and other ingredients. Amelia does not weigh any, just tips them into a bowl and works with her fingers, rubbing fat into flour, adding sugar, currants, eggs and milk, then scoops the mixture into a tin.

Testing the temperature one more time, she puts the tin inside and closes the door. Tom senses contentment in her and his worry that all is not well lessens.

This kitchen is the centre of their world. For cooking, ironing and eating. For Gordon’s christening, Dougie joining the scout cubs, Roy’s first steps into his outstretched arms.

Amelia uses the table for sewing, the boys to read and draw pictures. A room full of memories.

Amelia comes back to check her baking. This brings him back to the “now”. He must not waste his precious hours fretting. But he knows why he is so restless. It is anger, anger for what has been taken from him.

The front door opens. His sons come in and with them, carried by the summer breeze, a hooting noise and raised voices followed by rolling wagon wheels and the neighing of horses. Times are a-changing fast.

For Tom, there is no hunger as they eat their supper but the sight of Amelia’s fruitcake makes him want to lean forward and take a slice.

The early evening sunshine shafts through the kitchen window. Tom recognises the varnished toy trunk he made for Gordon. It gives him a good feeling to see his sons open it.

Tom sits on the floor and watches Roy pushing a wooden train set on the linoleum covered floor.

Dougie is sitting at the table with his paint-box colouring a horse. Gordon searches through a book, turning the pages quickly. He stops, studies a page with a motor car picture. Does he want to work with them when he leaves school? Tom’s anger returns.

This is where he belongs, where he is needed.

He looks at the clock when his sons’ bedtime goodnight calls end. He feels a tremor within, a warning…

He goes with Amelia into the garden. It’s still the same: her little patch of grass inside borders of roses, daisies and lavender. The vegetable plot he loved to tend is not so neat. She breaks off a pink rose, smells the scent and pushes it into her fair hair. Lifting her face to the sky, she closes her eyes.

Tom has resisted all day, but he cannot leave without holding her in his arms and kissing her lips. Neither can feel the touch, neither can express their love.

Tom holds her a long time. It is not enough, this one day to store memories for evermore. He hopes she will find someone else to share her life but the thought brings only jealousy of any man touching her as he had. But then, he can never come back.

The gas hisses but the mantle is bright and Amelia sits close to the dying embers. She is knitting several colours, working a Fair Isle pattern.

She stops, rises from her chair and takes their framed wedding picture from the shelf above the range. It is their only one, for he and Amelia had avoided the photographer’s lens.

Holding it close, she sways to and fro, gliding with little steps in a circle, tears spilling from her closed eyes. She is remembering, like him, another night, their first moments alone in this house. He had carried her into their bedroom and they made love until the dawn. For today would have been their 12th wedding anniversary.

Amelia does not put the photo back but pulls the gas chain and in the dimming light goes upstairs.

Tom lies with her one more time. His lifeless fingers ripple over her body. Her violet eyes remind him of summer pansies. He doesn’t want to go. He cannot stay.

In the hall, the grandfather clock begins to chime.

One… Tom kisses her closed lids.

Five… six… seven… The stairs are taking him away.

Eight… He looks at the hole in his chest where his heart should have been.

Nine…The Somme — he had been in the first wave over the top.

Ten… The bastards didn’t care, fodder for the cause.

Twelve… The mist fades from inside the grandfather clock.