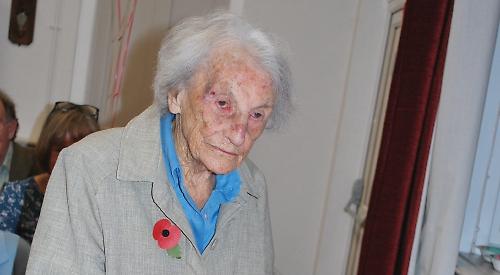 A TEA party to mark the centenary of the end of the Great War was held at Peppard war memorial hall.

The event was organised by the trustees of the hall, which was built in 1921 in memory of the soldiers from the village who never returned from the battlefield.

The 90 guests were served tea while 20 members of Sonning Common singing group Nottakwire performed a selection of favourite songs from the era with everyone joining in. Tim Valentine played the piano throughout the afternoon.

A celebratory cake made specially for the occasion was cut by the oldest person present, 109-year-old Mollie Walker, and the party ended with the loyal toast. Clive Mills, chairman of the hall trustees, said: “Our thanks to the members of the WI and luncheon club and friends for producing the food and serving and also to Ann Freeman for baking the cake.”

He also thanked Ru Butler, co-director with his brother Nick of Peppard Building supplies, who is the hall’s first patron and organised the donation of a defibrillator to the hall. The brothers’ great grandfather Arthur Butler built the hall.

The Chiltern Edge Association donated money towards the case for the defibrillator.