Christmas on the front line in 1915 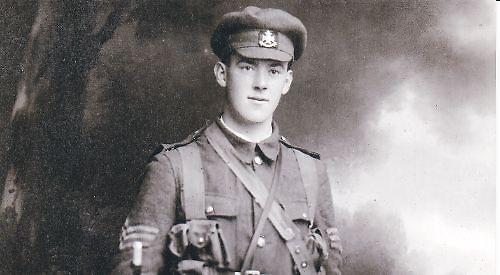 THIS year marked the centenary of the end of the First World War. To mark the anniversary, here we publish a letter written at the Western Front by Sgt W L Green, of the 1st/8th Battalion, Sherwood Foresters (Notts and Derby regiment), to his parents at Christmas in 1915. This is printed with the kind permission of his son John Green, from Maidensgrove, who is chairman of the Henley and Peppard branch of the Royal British Legion.

Many thanks indeed for most welcome and cheering letter which I received quite safely on Christmas Day.

I am writing to you from a cottage about 9km from the place where I spent my Christmas. We moved yesterday (Sunday 26 Dec); today we are having a holiday, but unfortunately for those who are going to play football it is raining hard.

I sincerely hope you all had as happy and merry Christmas as possible and I know quite well you would be thinking of me and at the same time wondering what sort of a time I should be having.

Well, under the circumstances, I had quite a good time and I thought deeply of you all at different times of the day.

Parades were, as usual, the day before Christmas, but as soon as they were over we set to work scheming and preparing to make our Xmas a good one.

In my last letter I think I gave a description of my billet and its occupants, namely NCOs of my platoon, and one or two details. The details were A Cookson pioneer, Y Wightman armourers assistant, W Robinson platoon officers servant and two batmen. In all there were 13 of us.

As usual at Xmas time, our first thoughts were given to the menu of dinner. There was to be an issue of pudding in addition to skilly so we decided to club up and buy some fowls.

None of us were very flush worse luck but we raised sufficient money to buy three good fowls at four francs and half each. By the way, the price of the poorest fowls in the neighbouring town was seven francs so I think we did very well.

It would be about seven o’clock on Christmas Eve when we set out to purchase. We tried one or two places without success until we began to think that buying fowls was going to involve a route march and, by the way, it was raining very hard.

We decided to go to the next farm in sight and try our luck and, to use an army expression, we “clicked” .

The little band accompanied the farmer with a storm lantern to the hen roost to carry out the dirty work.

We returned to our billet and killed and plucked them, hung them up on a beam and left the dressing till morning.

I have come to the conclusion that if I go on telling you everything we did in detail I shall use all this small writing pad so I shall have to be more brief.

The rest of Christmas Eve I spent reading Alton Locke by Charles Kingsley. The majority of the boys were quite orderly considering.

The true circumstances of Christ’s birth was impressed on my mind more strongly than ever before. I slept in a stable with that familiar smell of horses and cows. What a contrast from last year and the year before.

Yesterday I picked up a Strand magazine with the life story of Edmund Payne in it. I sat for a moment thinking of the grand time you and I spent on Boxing Day 1913.

It’s a funny thing, but while I was on the march yesterday morning the events of the same day two years ago recurred quite naturally.

I think the thing which impressed me most on that, my first visit to London, was the grandeur of Westminster, or rather the little bit of interior which I saw, namely Poets’ Corner. You’ll remember it quite well — the choir was singing Gloria in Excelsis. My word, what a glorious future. If only I am allowed to return with health and faculties all intact it will be all the reward I desire.

After all, the glory of Westminster, or a sunset, is as nothing compared with the Love which binds son to Father and Mother and visa-versa. Also to one’s affinity. It is facts like these which make me happy in any circumstances.

No doubt it will be some time before I see you all face to face again but you will all be ever present in my thoughts to cheer and spur me on in this state of life which it has pleased God to call me. I am convinced that our sun will shine as assuredly as spring will follow winter.

Well, to return on more to where I left off with regard to Xmas, we got the fowls cooked at a cottage and had a jolly good dinner. Between us we had plenty of cake, smokes etc.

Our platoon officer provided tinned fruit for tea so we didn’t do so bad considering.

In the afternoon I went for a short walk for [censored] exercise and spent the remainder of the afternoon and evening reading Alton Locke.

At night we had a “pow-wow” or “rough house”. The boys returned to the billet “canned to the wide”, (excuse slang). Except for one or two cases, they were all out for blood and in best fighting spirits. It’s a funny thing, but drink always makes our chaps full of fight.

I had the pleasant duty as senior NCO to soften them a bit and get them down to kip.

I had many blows aimed at me but they didn’t get right there, of course. I only made use of my wrestling abilities. It’s a good job for them I didn’t make use of my boxing abilities also.

As it was, next morning there were black eyes and swollen lips but I wasn’t responsible for them.

Perhaps you know there is no crime in the army on Christmas Day or else there would be a good many lodgers in the guard room.

While I remember, will you please send me a sleeping bag made of flannelette or some other suitable material? I don’t require it for warmth but for cleanliness.

Of course, in this climate keeping warm is an important thing so we have to sleep practically dressed, which encourages filth and disease. Disease is largely spread in the army by blankets, especially in the tropics, so you see the idea of the sleeping bag is to keep my skin from coming into direct contact with blankets etc, which as a rule are full of dirt owing to the way they are thrown about.

You need not send me any more trade journals but please send me MacFadden.*

Oh! By the way, the doctor has been round for a return of uninnoculated and unvaccinated men. My theories on the subject hold good.

At present, I am in the pink and as enthusiastic on physical culture as ever. Tell Claude to stick at it.

It seems ages since I had hold of a spanner or the handle of a lathe and yet I think I shan’t be left far behind.

Tell Lottie I will write again first chance I get, help her to keep smiling until the boys come home.

There are still heaps of things I should like to say but time will not allow at present.

At present I am acting Co orderly Sgt for Billy Markham who is Batt. O Sgt today. It is ... [final page of letter missing]”

• Sgt Green was awarded the Military Medal for gallantry at the Hohenzollern Redoubt, part of the Battle of Loos, in October 1915. In 1917 he was commissioned and was awarded the MC for action at St Christ on the Somme. In May 1918 he was seriously wounded in both legs and spent years in hospital before being discharged from the army in 1920. In the Second World War he raised a company of the Local Defence Volunteers (later to become the Home Guard) but lost an eye and was shot in the stomach in an accident on the rifle range. He died in 1951, age 56, as a result of his wounds.

*Bernard MacFadden was a well- known physical culturist of the day.