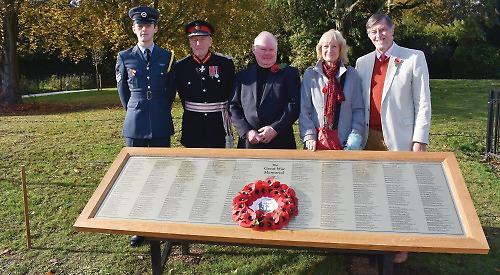 A MEMORIAL plaque featuring the names of more than 300 soldiers from the Henley area who died during the First World War has been removed for repairs only a year after it was installed, writes David White.

The Lord Lieutenant of Oxfordshire Tim Stevenson officially unveiled the plaque at a private ceremony at Townlands Memorial Hospital.

It was the brainchild of Mike Willoughby, an amateur historian from Woodcote, and his wife Lesley, who founded the Lest We Forget project to honour Henley’s “forgotten” servicemen.

Mr Willoughby removed the memorial on Tuesday with the help of Street Furnishings, of Wargrave, because the frame and the polycarbonate laminate plaque had been damaged by water ingress and sunlight. He said: “Water had got into the frame and it had started to open up. When it stopped raining the sun came out and the memorial started to wrinkle.”

Mr Willoughby said the plaque would be returned to the manufacturer who would change the wooden frame for brushed aluminium. He hoped to have it back as soon as possible.

Known as the Great War Memorial, the plaque features the names of all 312 soldiers from Henley and the surrounding villages who lost their lives in the conflict with the Lest We Forget logo in the centre. It includes their regiment, the date and cause of death and their age.

It includes 13 names which the Willoughbys discovered after three new memorials were installed at Henley town hall and Holy Trinity and St Mary’s Churches in the early stages of the project.

The plaque was paid for and installed by Townlands developer Amber Solutions for Care and NHS Property Services with support from the Higgs Group, publishers of the Henley Standard.