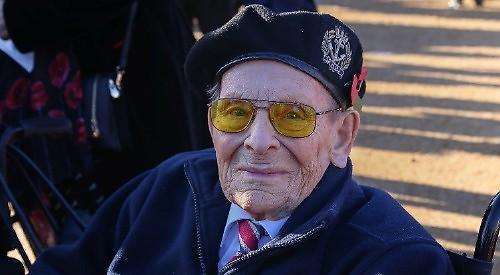 A BLIND war veteran from Watlington will take part in the remembrance parade at the Cenotaph in London on Sunday.

Ken Cook, 95, of Orchard Walk, will be among more than 100 former servicemen at the event, which is supported by the charity Blind Veterans UK.

This is the second year running that he will have taken part.

He was in a convoy of motor gunboats that carried out anti-submarine patrols and mine sweeping in the Mediterranean.

He took part in various missions during the Second World War, including the invasion of Anzio in Italy in 1944. He left the navy in 1946.

He said: “It was my first time marching last year and I’m so excited to be going back.

“It is emotional. The crowds make you feel very important and it does leave you feeling very proud.

“I will especially be remembering my father, who served as a staff sergeant farrier in France during the First World War.” Mr Cook, who joined fellow blind veterans on a tour of the battlefields in Normandy recently, lost his sight late in life due to macular degeneration, a leading cause of sight loss in older people.

He started receiving support from the charity in 2016.

Mr Cook said: “I don’t think I could have existed these last few years without their support — they saved me.

“It’s the things that allow you to keep your independence that make the biggest difference.

“I’ve been given a special reader that blows up documents to a huge size. That means I can still read my letters.

“The best thing that’s happened though is the lovely home visitor volunteer that Blind Veterans UK set me up with.

“Sue visits me every week and it is always the highlight of my week. She helps me with various bits and bobs and it’s great just to have a cup of tea and a chat.”

Blind Veterans UK was founded more than 100 years ago to support servicemen blinded in the First World War.

Now the charity supports veterans regardless of when they served or how they lost their sight.