Pupils learn to show their respect 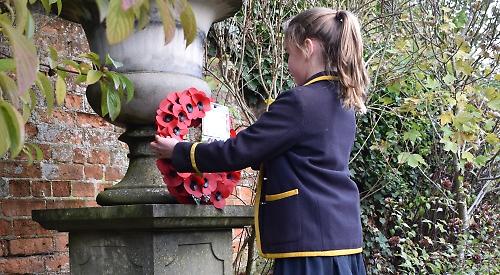 ABOUT 50 parents attended a remembrance service at Rupert House School in Henley.

More than 160 children from reception to year 6 gathered on the school’s artificial pitch to remember the war dead with a two-minute silence at 11am on Monday, Armistice Day.

They formed a semi-circle around a lectern from which headteacher Clare Lynas led the ceremony.

Head girl Lola Dyer, 10, spoke about the tradition of remembrance. She said: “November is the time of year when we wear a red poppy in memory of those who sacrificed their lives for us during wars.

“At 11am on November 11, 1918, the guns of the Western Front fell silent after more than four years of continuous warfare.” Annabel Buff, 10, spoke about the importance of remembrance.

This was followed by the silence during which parents and teachers bowed their heads and the children braved gusts of cold wind.

Mr Congdon played Reveille to mark the end of the silence and then year 2 teacher Alice Waters read In Flanders Fields by John McCrae.

The children, led by Lola and four-year-old Charlie Tonks, who is in reception class, then led a procession to the school garden and laid a poppy wreath on a large stone urn and miniature wooden crosses on the ground below.

Among the guests was Mike Willoughby, project co-ordinator of the Henley World War One and World War Two Remembrance Association, who was dressed in the uniform of a Great War “Tommy”.

He said: “I feel very privileged to be invited and to realise that the children understand and will continue to hold remembrance. They do an amazing job of it.” Headteacher Clare Lynas said: “There are certain traditions and values that we need the children to be introduced to. Our school values are courage, creativity, respect and resilience and I would say this kind of event is coherent with at least three of those.

“Quite little children were self-disciplined and showed some resilience in the cold. I think it’s important that they learn that there are other people out there that are more important on some occasions.”