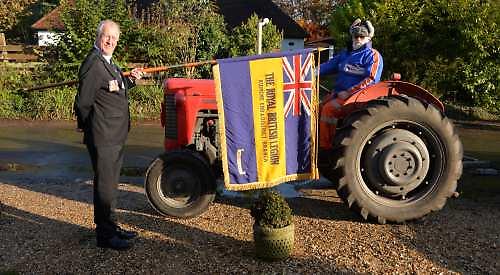 About 75 people and 23 tractors and trailers took part in the event, which was organised by the South Oxfordshire Tractor Society.

They met at the New Inn in Chalkhouse Green Road at 9am for bacon rolls, tea and coffee and were seen off 45 minutes later by David Young, who carried the standard for the Kidmore End branch of the Royal British Legion.

The convoy then drove through Sonning Common, Peppard, Rotherfield Greys and Henley.

The people sitting in the trailers were cheered by others at the side of the road as they went past. Many of the tractors had giant poppies attached to their radiators.

About half a mile outside Henley the convoy stopped in a field to observe a two-minute silence after listening to the 11am chimes of Big Ben on the radio. One member played the Last Post. Organiser Paul Jenkins, of Maple Close, Sonning Common, said: “It was very moving.”

The party then drove to the Rainbow Inn in Assendon to enjoy a drink before everyone had a roast beef lunch at White Pond Farm in Stonor, which is owned by Simon and Lindy Stracey.

The food was prepared by Mr Jenkins’s daughter Karen Lowe and her husband Colin.

Mr Jenkins said: “The whole day was fantastic, especially as the weather was wonderful and there were no breakdowns.

“I would like to thank everybody who helped and attended. We have had several people already say what a wonderful day they had.”