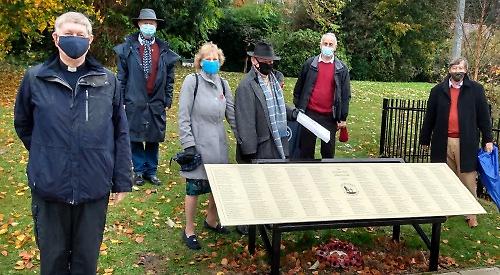 A BOOK honouring more than 250 service personnel from the Henley area who lost their lives during the Second World War has been presented to the Mayor.

Amateur historian Mike Willoughby has spent the past five years writing Bringing Them Home Too, which he researched by reading old censuses and reports in back issues of the Henley Standard.

The Henley section of the book names 140 people, of whom 48 don’t appear on any other local memorial.

It will be kept in the town hall and other copies will be placed in Henley library, St Mary’s Church, Holy Trinity Church, Christ Church and schools in the town.

The book is a sequel to Mr Willoughby’s 2014 work Bringing Them Home, which commemorated 298 local men who lost their lives in the First World War.

Mr Willoughby, a retired heating engineer, started researching and writing his sequel with help from his wife before he completed the first book but initially hadn’t intended to publish a second volume.

He said: “Covid left me with the time, although I couldn’t use the library to hone my research or come into the Henley Standard’s building to research old copies. It was more impromptu.

“After talking to Lesley, we decided it might be nice to do 10 copies for the local churches and schools, town hall and library.

“At the moment they are going to be in the buildings that are accessible. If anybody has a burning desire, it is available electronically.

“Fortunately, three-quarters of the work had already been done in parallel with my First World War research and a lot of further research was online and through the Commonwealth War Graves Commission.

“There was no better research for honing the information than the Henley Standard because there would have been lots of people only reported in the paper.

“Quite an amazingly high percentage of the men were in the RAF. There might only be one Henley man in the aircrew, although there were six others in it. Only the Henley man goes into the book but you’re remembering the whole aircrew.

“It’s a privilege to have created this research. It’s extremely pleasing to have finished the project and even more so to have spoken to relatives, of whom there are more with memories of the men than there were for the first book.

“Some amazing stories have come out of that and I’ve been surprised by how many people have been in touch.”

Mr Willoughby paid tribute to his wife, who did most of the typing and proof reading.

The book is dedicated to Brian Hughes, who was the standard bearer for the Henley and Peppard branch of the Royal British Legion for more than 20 years and died earlier this year, aged 86.

He personally raised more than £60,000 for the Legion’s annual Poppy Appeal.

Mr Willoughby said Mr Hughes and his wife Ursula, who died in 2017, had been a “great help”.

Councillor Arlett said the book must have taken an “amazing” amount of research adding: “The detail in it is excellent. Two of my uncles are listed.”

He continued: “I’d like to thank Mike on behalf of the town. This will stay in the mayor’s parlour so anybody going in there can read it.”

Councillor Arlett said he would be using money from his mayor’s allowance to fund the cost of more copies, saying it was important to give people the opportunity to read it.

Last year, Mr Willoughby was awarded the Henley town medal for his Lest We Forget project, which identified 312 soldiers from the Henley area who died in the First World War but didn’t appear on any memorials.

As a result, new memorials were installed at Henley town hall and Holy Trinity and St Mary’s.

Mr Willoughby also successfully campaigned to have the name of the new Henley hospital changed to Townlands Memorial Hospital. He would like to hear from anyone with information. To contact him, email mike@thewilloughbys.co.uk

Meanwhile, a memorial plaque featuring the names of more than 300 soldiers from the Henley area who died during the First World War has been reinstated.

The plaque, which was installed at Townlands Memorial Hospital two years ago, suffered damage because of high temperatures and water ingress.

The memorial, which was the brainchild of Mr Willoughby, was paid for and installed by the
hospital developer Amber Solutions for Care and NHS Property Services.

Known as the Great War Memorial, it features the names of all 312 soldiers from Henley and the surrounding villages who lost their lives in the conflict with the Lest We Forget logo in the centre. It includes the men’s regiment, the date and cause of death and their age.

The memorial includes 13 names which Mr Willoughby and his wife discovered after the other three new memorials were installed in the early stages of the project.

Mr Willoughby said the plaque had been showing signs of distress and was removed before the coronavirus lockdown earlier this year. Street Furnishings, of Wargrave, undertook the renovation work at no cost.

The memorial was re-instated last week and Dickie Way, from Henley, has been putting the finishing touches to it.