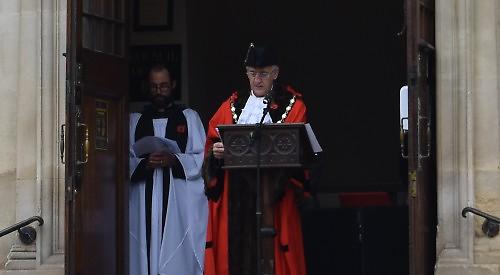 MORE than 100 people attended the Remembrance Sunday Service in Henley town centre despite the second lockdown.

The crowd observed social distancing outside the town hall in Falaise Square for the annual ceremony, which was scaled down due to the coronavirus pandemic.

The ceremony started with Rev Jeremy Tayler, the rector of Henley with Remenham, addressing the crowd from the town hall steps.

Anne Evans, who chairs the Henley and Peppard Royal British Legion branch, then read the Ode to Remembrance from Laurence Binyon’s poem, For the Fallen.

The Last Post was then sounded to signal the start of the two-minute silence during which most of the crown bowed their heads as a sign of respect.

Reveille was sounded to mark the end of the silence and Mrs Evans then read the Kohima Epitaph.

Rev Tayler then led a prayer before Mayor, Ken Arlett, addressed the spectators.

After his speech, the crowd remained silent before Rev Tayler delivered the Lord’s Prayer.

People were then invited to sing the National Anthem before the final blessing was delivered.

Wreaths were then laid on the town hall steps and people were encouraged to remain socially distanced when approaching the steps.

The first person to lay a wreath was Lady Cynthia Hall, Deputy Lord-Lieutenant of Oxfordshire, followed by the Mayor.

The Mayor then thanked everyone for attending and said he hopes things can get back to normality next year.

The crowd then applauded before quickly dispersing.

The entire service was recorded and can be watched on the town council website.