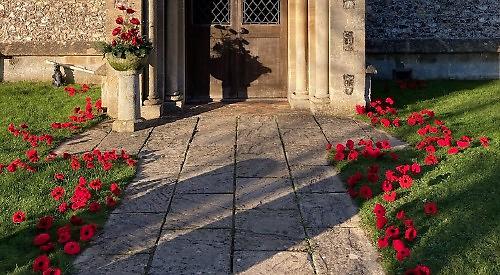 RESIDENTS of Shiplake observed the social distancing guidelines at the remembrance service held outside the Church of St Peter and St Paul, writes Gee Harland.

The scaled-back service was led by Rev Robert Thewsey, rector of the Shiplake and Dunsden with Harpsden benefice, who welcomed the small crowd.

The Ode to Remembrance from Laurence Binyon’s poem For the Fallen was read and then the Last Post was sounded.

A two-minute silence followed and everyone bowed their heads in respect before Reveille was sounded.

Wreaths were then laid on the steps of the memorial cross, including ones from Shiplake Women’s Institute and Shiplake College.

The Kohima Epitaph was read before Rev Thewsey led the crowd in a prayer.

Everyone was then encouraged to join in for an acoustic singing of the National Anthem before the final blessing.

The service was live-streamed on the benefice’s YouTube channel.

In Cookley Green, a service was held at the war memorial in Coates Lane and about 30 residents came to show their respect.

Residents Jenny and Peter Green organised the music and played a recording of the Last Post made specially by fellow villager Charlie Clinton.

In Kidmore End, about 60 people attended a short act of remembrance at St John the Baptist Church in Tokers Green Lane.

In Watlington, there was no service. Instead, wreaths were laid at the war memorial at the corner of High Street and Chapel Street at 9am by members of the Royal British Legion. At 11am, residents were encouraged to take part in their own acts of remembrance on their doorsteps.

Two helicopters, a Puma HC2 and Chinook, from RAF Benson performed a flypast. Tessa Mogg, secretary of the Watlington branch of the Legion, said: “It was great as the helicopters flew over as some of the wreaths were being laid.”

The helicopters also flew over Benson, Woodcote and South Stoke but didn’t make it to Henley or Bix due to low cloud.

Wreaths were also laid at the war memorial in Castle Square at a private event organised by the Benson and district branch of the Legion.

John Colgrove, vice-president of the branch, laid a wreath along with Bill Pattison, chairman of Benson Parish Council, and Wing Commander David Flynn, from RAF Benson. The usual parade in Wargrave was cancelled but a remembrance service was broadcast on St Mary’s Church’s Youtube channel. It included readings by some Wargrave guides and a statement from Major General Timothy Cross CBE. Rev John Cook, the vicar, said: “I think from all the comments we received from people that it was really appreciated.”

In Woodcote, an act of remembrance was held at the war memorial. The entrance to St Leonard’s Church was decorated with knitted red poppies. Fifteen people attended a service at the Dunsden Green war memorial.  It was led by Rev Michael Seymour-Jones and Rev Pam Gordon, rectors of the Shiplake and Dunsden with Harpsden Benefice.

The Last Post was played on the trumpet by Gary Howarth. Wreaths were laid on behalf of the Shiplake and Dunsden branch of Royal British Legion, Sonning Eye Parish Council and the scouts.