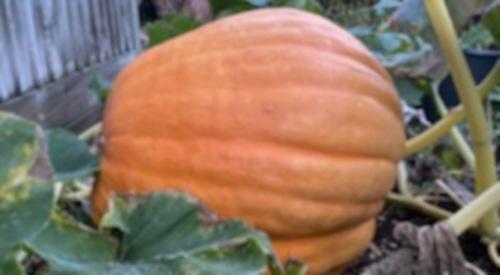 A GIANT pumpkin grown to raise money for the Poppy Appeal has vanished.

Binmen are suspected to have taken the 60lb specimen and another smaller fruit from David Young’s front garden in Ashford Avenue, Sonning Common.

The 63-year-old had intended to auction the pumpkin or offer it as a raffle prize at the New Inn pub in Kidmore End on Remembrance Sunday.

He discovered it was missing on Wednesday last week.

“I’m very disappointed and so gutted,” said Mr Young. “When I got home straight away I thought, ‘Oh, the pumpkins have gone’.

“I thought possibly some kids could have them so I went across the road to speak to my neighbour and she said she had seen the waste vehicle parked by my driveway and two guys walking across my drive on to the vegetable patch.

“She didn’t see them physically take the pumpkins but when I told her they were missing it all clicked.

“They’ve taken my pumpkins — and for what? What gave them the right to do that? I wish they could explain it to me but I don’t want to see them.

“Maybe they thought they were getting rid of it for me as Halloween was over or maybe they wanted to sell them on. It’s just very strange.”

Mr Young, who has lived in Sonning Common all his life, had decided to support the Poppy Appeal because the Royal British Legion has been unable to fund-
raise as normal due to the coronavirus pandemic.

He has been a member of the Legion for more than 20 years and is currently chairman of the Kidmore End branch, which used to meet at the former Reformation pub in Gallowstree Common, which his family used to own.

The retired telecommunications engineer has been an honorary Poppy Appeal organiser for 26 years and is now also his branch’s standard-bearer.

In 2018, he won a volunteer of the year award for his fundraising efforts and received a letter of congratulations from Henley MP John Howell.

Mr Young said: “I grew up with the charity. My dad was in the RAF and I’ve got his medals, which are paraded each year.

“The charity has been hit by the pandemic and we couldn’t do as much as we wanted to last year.

“I thought I would do a raffle or an auction or ask restaurants if they wanted to buy the pumpkin just to raise more money.

“I was going to take it to the New Inn after the Remembrance parade on Sunday to show it off.”

Mr Young has been growing pumpkins for years and he and his three sons, Thomas, 32, Andrew, 29, and Russell, 27, hold an annual competition to see who can grow the biggest one.

“We’ve all got the bug,” he said. “Thomas has won awards at the Henley Farm and Country Show and the Binfield Heath Flower Show.

“We always keep the seeds from the previous pumpkins to plant indoors and once they’re big enough I plant them outside and they look after themselves.

“My sons were annoyed when they found out my pumpkin had been taken because of all the time and effort I had put into looking after it. Obviously I don’t have the seeds for next year now but hopefully my sons have kept some. We have to carry on.”

Mr Young said he would like an explanation from Biffa, South Oxfordshire District Council’s waste contractor.

“Are they looking in everybody’s gardens when they come and pick up bins?” he said.

“Now I worry about what else they are going to do.”

A Biffa spokesman said: “We take allegations of theft seriously and are looking into this matter.”