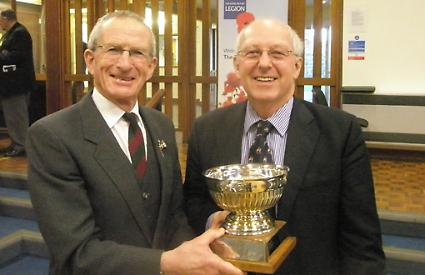 THE Henley and Peppard branch of the Royal British Legion has won a trophy for raising more than £30,000 during last years Poppy Appeal.

The Goadby Cup, which is for the highest percentage increase in poppy sales over the previous year, was presented at the Legions Oxfordshire county conference in Kidlington.

The branch raised about £10,000 more than in 2012 during Novembers appeal. It last won the award in 2011 after raising £20,000. Mr Green said: This award is a result of [appeal organiser] Shirley Lees efforts and the generosity of the people of Henley and the surrounding district.

Mr Hughes, 81, of Harpsden Road, Henley, served in the Royal Army Service Corps in Egypt in the Fifties.

He first applied to become a standard bearer in 1999 after seeing an advert in the Henley Standard and has served for the Henley and Peppard branch since then. Mr Hughes said: The competition was quite poor this year. I was up against one other person but in previous years there have been five or six. Ive got at least two processions coming up this year but there may be more if people request it for private funerals and the like.

Mr Hughes, who also carries the standard of the Henley Dunkirk Veterans, has no plans to hang up his flags just yet.

He said: Its a competition so if someone wants to come along and knock me off their perch its up to them. Until then Im happy to keep going as county standard bearer.