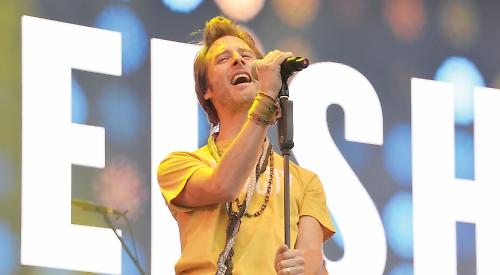 CELEBRATING its tenth anniversary, and under the new management of Global, the Rewind South festival once again rocked Temple Island Meadows with its line-up of Eighties — and in some cases Nineties — radio-friendly artists strutting their stuff on the main stage over two nights.

With the actual production of the three Rewind festivals relocated to Manchester, it no longer sees talented local impresario Paul Carey at the helm, and long-time attendees at this year’s event noted certain changes in logistics and organisation.

Whether the changes — which included a larger VIP area, a slightly reordered village layout and a longer trek to washing facilities for campers — will remain the same next year is yet to be seen, but presumably Global execs will be on the trail for constructive feedback.

None of this seemed to detract from what proved to be another hugely successful event, with crowds purportedly topping 20,000 on Saturday alone, most of whom seemed happy to invest two full days of their weekend to get garbed up in Frankie Goes to Hollywood T-shirts, don pink mullet wigs, and boogie on down to 30-year-old pop hits.

The schedule kicked off on Saturday slightly earlier than announced, with former members of the The Jam (known as From the Jam) and backing musicians from ELO (aka The Orchestra) pumping out glam-era tracks, including Xanadu and Mr Blue Sky. But it was probably the welcome return of Howard Jones with his era-defining yet thoughtful top 20 hits such as Pearl in the Shell, What is Love? and Things Can Only Get Better, which set the field alight and let the singalong begin in earnest.

There’s certainly room here for a longer set than five songs and a higher billing, particularly as Jones had imported his own superb backing band, which included drummer, percussionist and brass.

Billy Ocean, with voice in tip top form, also capitalised on his backing musicians’ credentials, with a towering sax solo delivered on Get Outta My Dreams, Get into My Car. While the crowd relished the opportunity to sing along with Jason Donovan to Any Dream Will Do, the former Neighbours star seemed unable to engage fully with this audience, and some slightly ropey vocals characterised the first couple of numbers.

Chesney Hawkes joined Nik Kershaw for an utterly rousing rendition of The One and Only, and one of the high points of the afternoon. Kershaw’s protracted set list could have easily benefited from another five or 10 songs — he has enough hit material to draw on.

Former Ultravox frontman Midge Ure’s expert guitar licks on If I Was were as dexterous as ever, and his staple Rewind favourite Vienna once again set the tone for the early evening proceedings.

But it was Soft Cell’s Marc Almond belting out dance floor favourite Tainted Love and the beautiful Say Hello, Wave Goodbye with his charisma and presence that seemed to shift the show up a gear. Then after a short set by Shalamar, Kool and the Gang took to the stage for one hour of jazz-funk favourites.

Originally formed in 1964 in New Jersey, the troupe still retains some of its original members, and the seasoned pros aptly closed out the night with dance classics such as Ladies’ Night, Get Down on It and Celebration.

All this and we were still only on the half-time oranges. A dayglo delight.