Dayglo doyennes sock it to us 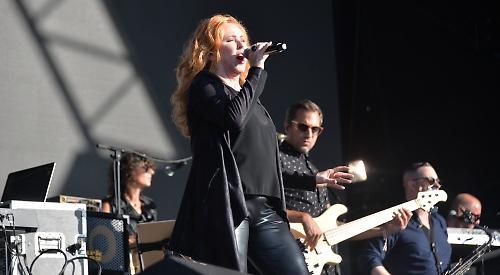 WITH the Rewind South festival once again blessed with fine summer weather, and increasingly breaking clouds throughout the day providing perfect conditions for an outdoor festival, Roachford kicked off proceedings with a high-energy set that included Cuddly Toy and Only to Be with You.

Easily one of the finest performances of the afternoon, Andrew Roachford’s powerful vocals were underscored by his band’s faultless musicianship.

China Crisis closed out their set with the brilliant single Wishful Thinking, and accomplished songwriter and multi-instrumentalist Paul Carrack, decked out in goatee beard and panama hat, followed with Mike and the Mechanics favourites The Living Years and Over My Shoulder, as well as his self-penned When You Walk in the Room and These Days. Once again, an impeccable back-up band delivered tight accompaniment.

If Carrack and Roachford had perhaps stretched the Eighties remit for Rewind South, no such criticism could be levelled at Tom Bailey of the Thompson Twins and his all-female musicians.

The lively chorus join-ins on anthems Hold Me Now, Doctor! Doctor! and Lay Your Hands on Me must surely have been heard in Henley town itself. If the Thompson Twins’ songs seemed trite at the time of release, then you might be surprised how well they’ve held up. Nothing short of magnificent.

It was good to see that Doctor and the Medics enjoy returning each year, and Carol Decker’s age-defying vocal cords on T’Pau hits Secret Garden and Heart and Soul were breathtaking.

Heaven 17 also returned to the Henley stage with a longer set than last year, which included (We Don’t Need This) Fascist Groove Thang, Penthouse and Pavement and an extended version of Temptation.

We also got to welcome back Rewind mainstay Kim Wilde, and who could argue with that? Joined on stage by family members, she clearly revelled in the crowd’s response to her catchy pop-rock winners, just as last year. You Came, You Keep Me Hangin’ On and Kids in America brought 20,000 people to their feet a non-stop hit parade.

Jimmy Somerville, formerly of The Communards and Bronski Beat, in his trademark high-register voice, led fans through dance hits Boy Meets Girl, Never Can Say Goodbye and Don’t Leave Me This Way.

Throughout this and several of the previous artists’ acts, the Rewind All Star Band provided note-perfect accompaniment.

OMD (aka Orchestral Manoeuvres in the Dark) headlined on the final night, and whether you subscribe to the band’s simplistic writing style, and even banality, there was no denying the spectacular visuals on display.

Meanwhile, the machine-like precision of the proficient musicians on stage complemented the 14 chart hits that followed.

Singer Andy McCluskey got down with his trademark contorted dancing and passionately led the band through unmistakable tunes like Enola Gay, Souvenir, and Joan of Arc before closing out with the fast-paced Electricity.

It might seem strange to think that Rewind has now been going for as long as the Eighties themselves lasted, but the festival has more than lived up to the promise of its name. Once again, it was great to go back.