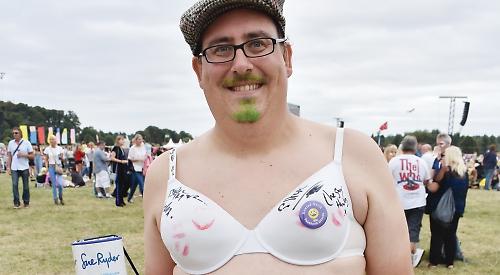 THE Rewind Festival isn’t short of Eighties pop fans in outrageous costumes but one man in particular caught the eye at this year’s event.

Jon Swindle wore a bra, tutu and flat cap and stood outside the VIP enclosure asking stars including Billy Ocean to sign the white bra, which he then auctioned for charity.

Mr Swindle, otherwise known as “The Bra Man”, has now announced that he raised £1,100 for Sue Ryder and children’s charities MACS and Alice Escapes.

Well worth the inquisitive looks he must have received!