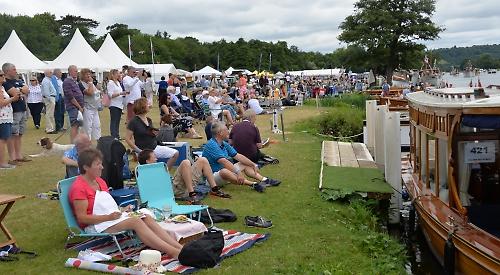 A FLEET of 15 boats used to rescue soldiers from Dunkirk during the Second World War took to the river in Henley for the annual Thames Traditional Boat Festival.

The crafts were part of the Dunkirk Little Ships, a group of private boats which travelled from Ramsgate to Dunkirk in 1940 as part of rescue mission Operation Dynamo, and took part in a display at the three-day festival last weekend.

They now belong to the Association of Dunkirk Little Ships, which was founded in 1967, and paraded past thousands of spectators on the banks of Fawley Meadows, off Marlow Road.

They included Tom Tit, a 40ft motor yacht which was famously stolen from Ramsgate harbour in June 1940 by brothers Ron and Alan Tomlinson so they could take it to Dunkirk to aid in the rescue mission.

They successfully ferried hundreds of soldiers between the beach and big ships 16 times before returning to Britain, where they expected to be arrested. Instead, they were congratulated by naval officers.

Another ship, Aberdonia, played wartime music through speakers as it passed spectators, while Goring resident John Calvert took part in his motor yacht L’Orage. The craft, previously known as Surrey, was owned by television presenter and Henley resident Raymond Baxter before Mr Calvert restored it.

The Little Ships helped rescue more than 300,000 British and French soldiers from the French beach and three of those which took part over the weekend feature in a new blockbuster film on the mission called Dunkirk, which was directed by Christopher Nolan and stars Tom Hardy and Harry Styles.

There was also a parade by Dunkirk veterans on Saturday, who were joined by the Sea Cadets band on the site’s central bridge.

The Little Ships were joined by more than 200 other boats for the festival, including canoes, punts and amphibious cars.

However, a First World War torpedo boat, the last remaining craft of its kind, was forced to pull out of the event after hitting a bridge in Bristol while being transported to the event on Friday.

Commodore Tony Farncombe, of the Association of Dunkirk Little Ships, who took part in the parade with his boat Wanda, said: “We’ve been going to this event for a number of years and I’ve always enjoyed it. The revised version has gradually increased interest and now it’s not just the boats, there are other things there to enjoy.

“We enjoyed doing the ‘flypast’, particularly on Sunday when members of the Navy got on board the boats and gave a salute and three cheers to the organisers and then the association. Everybody on the bank stopped and listened, it was a spectacular scene to see.”

Mr Farncombe, who lives in Kent, says members of the association also attended the premiere of the new film last week and events like that and the festival were helping the story of Dunkirk to be remembered.

He said: “Over the last few years Dunkirk has become more in the public consciousness, they are starting to talk about it more in schools and children ask us questions.

“It’s about building up interest from the public and the film is really going to help bring it to attention.”

The Queen’s royal barge, Gloriana, was at the festival every day and took part in rowpasts on Saturday and Sunday powered by members of local rowing clubs.

The rowers raised their oars as a sign of respect as they passed the commentary booth on the final stretch of the course, before mooring up to let passengers off.

Other vessels on display included a Victorian steam cruiser, tugs and working boats and a flotilla of steam-powered craft, many of whom blew their whistles as they passed spectators on the bank.

A fleet of French canoes took part in a display on Sunday as they paddled up the river before manoeuvring around a buoy, while several punts also rounded the obstacle while travelling down the course.

One canoeist even had to rescue the hat of a passenger from the boat in front after it toppled off while they were completing the manoeuvre.

A procession of amphibious cars, including military models and a converted campervan, took to the water on Sunday. Among them was Lyndon Yorke, who has also taken part in the annual Chelsea Fringe Henley floral flotilla in his Dutton Surf car, Platypus. Mr Yorke was followed by Tim Dutton, founder of Dutton Cars, which provides kits to convert cars into amphibious vehicles.

Dozens of people also gathered on the southern end of the site to watch the cars emerge from the water, cheering when the vehicles successfully negotiated the ramp on to the bank.

On dry land, there was an exhibition of vintage and classic cars and motorbikes, while in the air there were fly-pasts by the Battle of Britain Memorial Flight, which this year included an American Douglas C-47 “Dakota” transport plane, and biplanes and triplanes from the Great War Display Team.

Thousands of people watched the action from the bank, despite rain on Saturday putting some spectators off. Others moored their own boats up or travelled up and down the river during the weekend. Many had dressed in old-style clothes, while one woman was ferried down the river in a rowboat by her companion while wearing a Victorian-era dress and holding a parasol.

Luscombe’s at the Golden Ball in Lower Assendon had a stall serving fish and chips and other meals while the Time For Tea mobile vintage café, which is based in Henley, sold cakes and hot drinks.

There were also stalls by local boatbuilders and marinas including Henwood and Dean in Henley and Val Wyatt Marine in Wargrave, while cyclists on old-style bicycles including a Penny Farthing took part in displays around the site.

Hobbs of Henley ran a free river shuttle service from the town centre to the festival site and back for ticket holders, while there were parties on Friday and Sunday night with performances by local artists. The festival is now in its 38th year but was previously known as the Thames Traditional Boat Rally until 2014, when it was called off due to flooding on the meadow at the start of that year.

It was revived under its current name in 2015 by a new organising committee led by Lady McAlpine, of Fawley Court. Last year, there were more than 15,000 visitors.

Lady McAlpine, who attended the event with her husband Sir William and their pet Labradors, said this year’s event was the best since it was revived three years ago.

She said: “It was absolutely brilliant. I was doing the swan upping on Tuesday and every boat we went past was waving and shouting ‘great festival!’. The rain on Saturday will have affected numbers and trade figures so that’s depressing but it really picked up on Sunday.

“We finally got the layout right and had lots of good boats. The illuminated parade on Saturday night was a hoot and the new members’ enclosure worked well. I think we’ve finally cracked it, it’s taken us three years and it will just improve now.”

Festival organisers handed out more than 30 awards, with new patron Sir Steve Redgrave presenting the prizes at a ceremony on Sunday evening. They included awards for each category of boat, as well as the best illuminated display and an overall award for the best boat.