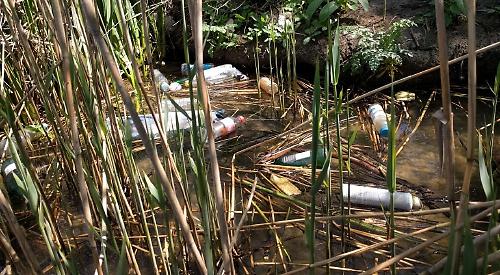 MORE than 30 bags of rubbish were cleared from the River Thames between Sonning and Shiplake earlier this month.

A team of 45 volunteers, including 20 children, collected a mass of plastic bottles, shoes, lighters, metal cans and even a ring still in its box.

The worst area was near Shiplake where there are patches of reeds which gather litter.

The volunteers, who were given litter-pickers, latex gloves and bin bags, carried out the clean-up from 11am to 2pm in 25C heat.

They were split between 18 small boats, including wooden rowing boats, inflatable canoes and Canadian canoes, which were launched at Shiplake Lock. There were also two small motorised dinghies to help move the bigger rubbish items, such as traffic cones and signs and plastic and wooden crates.

The volunteers included residents, Shiplake College pupils and staff and members of Shiplake Vikings Rowing Club and the Shiplake Outloars. All the rubbish was taken to the Environment Agency refuse barge by Shiplake Lock.

Organiser Guy Fisher, a company director who lives in Binfield Heath, has organised the annual river clean for four years.

He said: “There was more people than ever helping and more rubbish but we noticed that the number of plastic bags was reduced significantly, so we can only assume that the legislation that introduced charging for plastic bags in large shops is beginning to work.

“Hopefully, the Government will usher in more quickly the banning of plastic bottles and plastic food packaging, which sinks to the river bed.

“Thanks so much to everyone who came to help this year, especially Shiplake College for use of their riverfront and extra canoes.”

Mr Fisher added: “I row up and down this stretch about four times a week and I see the litter accumulating, which I find hard.”