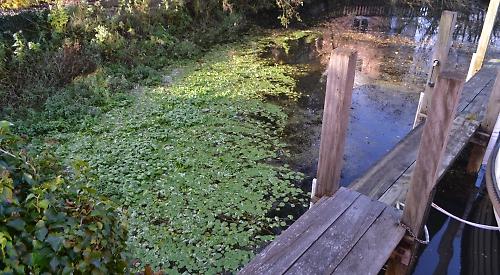 AN invasive river weed could return over the winter, the Environment Agency has warned.

More than 40 tonnes of floating pennywort was removed from the Thames in Henley, Wargrave and Sonning in July but river users are being warned not to be complacent.

An agency spokesman said: “We and our local partners have been working hard to manage and monitor the spread of floating pennywort and because of this we have had to remove significantly less than in 2017.

“This reduced growth shows that we are starting to get the spread of this invasive plant under control but we are not getting complacent and know that, with everyone’s help, we will need to continue our efforts for several years to come.

“However, winter means fewer people are on the river keeping an eye out. We are urging riverside owners, anglers, boaters and canoeists to continue being vigilant and report any new growth.”

The weed, which comes from the Americas, can grow up to 20cm a day and forms a thick layer that kills flora and fauna by depriving them of oxygen.