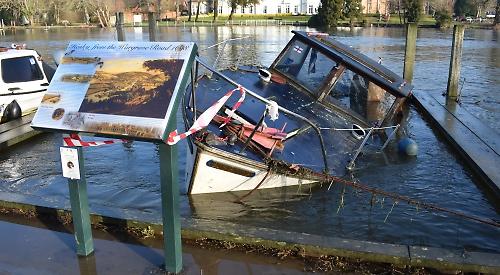 A MAN says he is pleased his boat is back afloat on the River Thames in Henley after it sank following heavy rain.

George Roberts, 75, had moored Big Prop outside Hobbs of Henley but it sank when the water level rose on December 28.

Firefighters were scrambled to the 20ft vessel amid fears that someone was in the river but quickly established there was no one in danger.

Mr Roberts bought the 60-year-old boat from Bushnell Marine Services in Wargrave seven years ago for £7,500.

It has a strong fibreglass hull but sank because it was tied down to its mooring and could not rise with the increasing water level.

Eventually the water came through a port side window and caused the boat to fill up and slant to one side. A CD player was damaged and the engine now requires new oil.

On Friday, Cook Piling, of Hurley, lifted the boat out of the river with a crane and pumped out the water before returning it to its mooring. Mr Roberts, a retired estate agent who lives in Hart Street, Henley, said: “The river level rose quite dramatically.

“I went down on the Sunday and found there was a broken window on the upstream side of the boat and she was full of water and looking a bit sad.

“I knew I had to get it sorted out but couldn’t because Hobbs was shut during the Christmas period and I couldn’t get in touch with them.

“I’m not sure why the fire brigade was called. Maybe someone thought I might be in the boat. Luckily, I wasn’t.

“I’m pleased to say she’s now fine and back on track, sitting in the river again.”

The rain caused flooding in parts of Henley, Shiplake and Wargrave and the Environment Agency issued warnings.