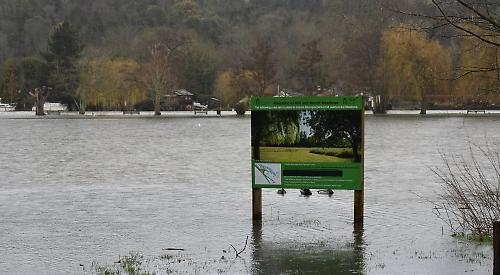 THE owners of a pub say it is “business as usual” despite their car park being submerged by floodwater once again, writes Luke Adams.

Nick Willson and his wife Hazel Lucas, who run the Flowing Spring in Playhatch, are suffering following heavy rain during Storm Dennis at the weekend and Storm Ciara a week before.

The low-lying land around the pub is flooded and about 2ft 6in of water is covering the garden and car park behind the pub on the A4155 Henley-Reading road.

The couple face a bill of thousands of pounds as the water has damaged ffencing and temporary wire fencing was washed away. The drainage system may also need to be replaced.

Oxfordshire County Council, the highways authority, closed Spring Lane, which is next to the pub, on Monday afternoon because it was unsafe.

Mr Willson said: “The water level came up really quickly. On Sunday about a fifth of the car park was under water and then on Monday afternoon the whole lot was flooded.

“This is the fourth time since early November that the car park has been flooded.”

The pub remains open and Mr Willson thanked customers for their continued support.

He said: “Some people can’t believe we are actually open when they see how bad it is out there. For the people who don’t know the pub and just drive past it doesn’t look great, so we do lose passing trade.

“The customers are absolutely fantastic — they never cease to amaze us. Regardless of the conditions, they keep coming back and we are eternally grateful.”

The couple, who have been married for 14 years, live at the pub, which they bought from Fuller’s in 2017 after running it for more than six years.

The site has a long history of flooding problems as it is on a flood plain near the River Thames and the pub gets its name from the natural spring which rises on the opposite side of Spring Lane at the foot of Hawthorn Bush.

In the winter of 2012/2013, the pub lost weeks of trade because the car park was under several feet of water.

“That was just one long flood from Christmas until March,” said Mr Willson. “It has never been as bad as this since we have owned it but we have never had to close the pub — we just carry on.”

The Environment Agency issued flood warnings for Henley, Remenham, Medmenham, Shiplake, Wargrave and Charvil, saying property was at risk of flooding as the levels of the River Thames and Loddon remained high.

In Shiplake, the Thames Path off Mill Lane was out of action due to flooding.

The riverside footpath in Mill Meadows, Henley, was also inaccesible in places.