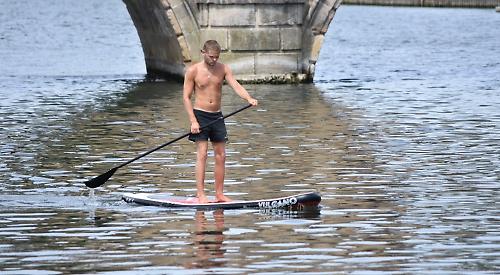 BOATERS in Henley have resumed their activities on the River Thames after the Government began to ease the coronavirus lockdown.

On Tuesday, when the temperature hit 23C, a variety of vessels was on the water from traditonal boats to modern pleasure cruisers.

There were also canoeists and kayakers as well as some topless paddle boarders venturing upstream in the sunshine.

The Environment Agency, which is responsible for the Thames, has announced non-tidal sections of the river can be used by all types of vessel.

It has completed surveys of every reach, marking all identified obstructions, and released guidance for river users. When travelling upstream boaters should keep red obstruction marker buoys on their left and green buoys on their right and vice-versa coming downstream.

Single yellow marker buoys can be passed on either side.

The agency says all river users should exercise caution, especially at bends in case of tree debris or shallow water.

All the locks are self-service until further notice and power functionality has been restored at locks where it is installed.

Hobbs of Henley has not yet
re-opened, saying it is waiting for advice from the Government on commercial boat hire but expects the go-ahead soon.

A spokesman said: “See you all very soon. We can’t wait to be back on the river. Let’s just hope the weather stays.”