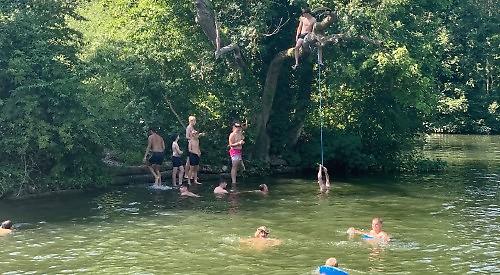 HUNDREDS of people descended on Hurley Lock  and damaged equipment belonging to the Environment Agency.

Police were called to Mill Lane at around 4pm on Thursday last week. Officers patrolled the area but no arrests were made.

It is thought that more than 1,000 people came to the village in the space of 24 hours due to the warm weather and many of them were seen ignoring social distancing rules.

The damage included handrails being removed and broken padlocks, fences and electrical equipment.

Members of the public could be seen jumping into the river in a dangerous manner to swim.

The Environment Agency employed a security officer to patrol the area during the evening.

Stuart Cripps, chairman of the Hurley Village Association, said the recent hot weather had caused the number of visitors to rise sharply.

He said: “The size of the crowds and the dangerous bridge jumping was there for everyone to see but I wasn’t aware of any vandalism.

“I live on High Street and for the most of the day it was blocked solid with cars coming into the village, but there were also lots of locals.

“The Environment Agency said there were about 1,000 people on the lock island, which is where they go and swim from, so it was a huge gathering.

“The bulk of the people who were there were teenagers who were having a good time. There wasn’t any violence but there was certainly drugs and booze.

“Hurley is listed on lots of London news sites as being a good place to come to, along with Henley, Marlow and Cookham and I would do the same if I lived in a tower block in London.”

Mr Cripps, who took over as chairman of the village association about three months ago, said the issue of parking was a priority for the committee, which meets every quarter.

He also said he was disappointed by the amount of litter left behind.

Mr Cripps added: “We don’t want to tell people to stay away, we want to share our village. At the same time, we want people to realise that there is very limited parking because Hurley is a cul-de-sac.

“There is a big issue with the parking. The roads are very narrow and if there was an incident, an ambulance would struggle to get down and so it becomes a safety issue when a large number of people want to jump into the river.

“It will be a problem throughout this summer. Maureen Hunt, our local councillor, has arranged to have the whole of High Street coned for two weeks, so you can only park in the limited number of bays.

“The whole area is covered in cones — it looks a bit like a ghost town — and then we are trying to work out with the council what will happen for the rest of the summer.

“We will attempt to resolve the parking with the permission of the local council, but there are only so many things that can be done. I think they will be suportive of sensible suggestions.”