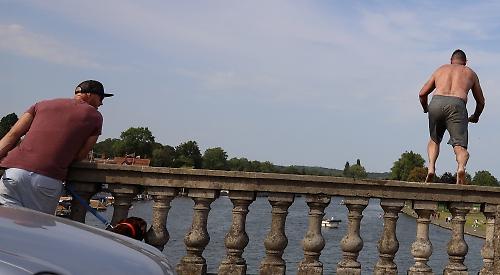 A GROUP of men who jumped off Henley Bridge into the River Thames have been labelled “absolutely stupid”.

Police responded to three calls about the incident on Saturday afternoon when temperatures soared to 32C in the sunshine.

But by the time officers arrived at the historic bridge the men had already left.

Police were called to similar incidents at Sonning Bridge, Whitchurch toll bridge and Temple lock in Hurley over the weekend.

Witnesses to the Henley incident described seeing several men leaping from the stone parapet on the downstream side of the bridge.

Town councillor Will Hamilton was on the river in his slipper launch when two men landed in the water about 10ft in front of the boat as he came through the main bridge arch.

He said: “I thought to myself ‘that was a close call’. I told them not to jump again because it is dangerous.

“Henley Bridge is certainly not something to jump off with the amount of river traffic and the foundations of the old bridge there. About 20 years ago someone was paralysed as a result of bridge jumping.”

Mark Dunlop, who runs the Angel on the Bridge pub, said: “It is becoming more common this year. It seems to be mainly kids doing it. A few weeks ago, a kid grazed his chest but he seemed to be all right. I suppose kids will be kids.

“It is dangerous as there are cars using the bridge and it is a huge distraction. There are also boats and other river users and if you are not aware you could jump off and land in someone’s boat.” Henley fire station issued a safety warning on social media.

The post read: “We’ve had reports that there are people jumping off the bridge in Henley into the Thames. We strongly urge you not to do this as you’re putting yourself in danger and potential life-threatening situations.”

Firefighter Michael Clarke added: “We received a message on our social media account, telling us that there were several people jumping off Henley Bridge into the water. We were asked if we could go down there and stop them. Unfortunately, we can’t do that as it is down to the police to enforce.

“We did, however, warn people of the dangers of jumping into the river. There are old foundations from the original bridge, lots of boat traffic, cold water shock and even water-based diseases that you can catch from entering the water.

“We don’t want to stop people having fun during this lovely weather but there are more than 450 accidental deaths a year in UK waters and we are working hard to reduce that number.”

Henley Mayor Ken Arlett said: “It is absolutely stupid. I can’t believe they don’t understand the harm they could do to themselves and others.

“The water is not very deep — people think it is 20ft but it is probably more like 8ft and there are lots of obstacles down there. Somebody will get seriously injured and may even die by doing this. I have lived in Henley for a long time and in the past people have died. If people want to enjoy themselves, they can do so by swimming down at Mill Meadows.”

Councillor Arlett added: “I’m not sure there is anything we can do about it. There is only so much signage you can put up. We are putting up signs all over the place about cycling and barbecues but people just ignore them or tear them down. If people were coming from the pub, I don’t think they would bother to read the signs. We have seen with social distancing how some people just don’t bother.”

Police were called to the bridge in Whitchurch later on Saturday afternoon and found a group of men jumping into the water. Officers warned them before leaving.

An hour later, police were called to Sonning, where up to 20 men were said to be jumping off the bridge. Again, the officers warned the group before leaving.

On Sunday afternoon, police were called to Hurley, where they found people jumping into the water. Two were given on-the-spot fines while others ran off.

On June 25, more than 1,000 people descended on Hurley and caused a significant amount of damage to Environment Agency equipment. This included handrails being removed and broken padlocks, fences and electrical equipment.

Stuart Cripps, chairman of the village association, said the number of visitors had shrunk since that incident and that traffic cones had helped to deter dangerous and illegal parking.

He said: “I believe there are still people jumping but it is certainly much better down Mill Lane since the cones were put in. It is still very busy though. The other issue is the amount of rubbish they leave behind. The bins were overflowing and there was lots of rubbish left by the side of them.”

Pat Doyle, who lives in Thames Street, Sonning, and is a former chairman of the parish council, said the number of incidents of people jumping from the bridge in the village was increasing. He said: “It has been going on for at least two or three weeks now and has built up.  There are lots of kids jumping off the footbridge, which they always do, but now they are running across the road, which is dangerous, and standing on the main brick bridge. It is just a recipe for disaster.”

Graham Dednum, owner of the Ferryboat in High Street, Whitchurch, said: “On Tuesday, I saw eight youngsters jumping off the bridge and then they would get out of the water and go back up and do it all again.

“It was the same at the weekend but this time it was a smaller group. The kids are a danger to the traffic and themselves. I don’t know why it’s not prohibited in some way. I have spoken to the police about it before, but they say they can’t stand there all day.”ow to behave in open areas.”